Stray cat falls from upper deck at Miami-Appalachian State game, is caught by fans below 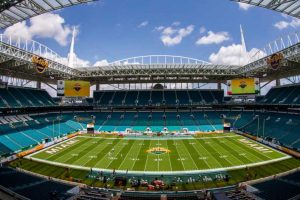 The crowd at Hard Rock Stadium was loud in the middle of Saturday’s game between Miami and Appalachian State, but for a few minutes the noise wasn’t related to the action on the field. The fans instead were focused on a stay cat dangling from the upper deck.

The cat’s struggle for survival quickly hit the internet as fans took video of the feline clinging to the structure. Some fans even seemed worried for the cat. All the sections around the animal were certainly more concerned on its struggle than the game.

BENDER: Oregon’s upset of Ohio State was a long time coming for Pac-12

Georgia’s Stetson Bennett lights up UAB in record first half

All of a sudden, the cat fell and the crowd gasped, screamed and then got quieter. Fans weren’t sure whether the cat had survived the fall.

But, as they say, cats have nine lives, and this cat definitely proved that. It was saved by fans who caught it in an American flag — on the 20th anniversary of 9/11.

Once it was clear that the cat was alive, the crowd cheered and jumped around. It was as if Miami had scored a touchdown, judging from the excitement level.

The Miami Herald’s David Wilson interviewed the couple who saved the cat, They said they bring the flag to every game. Naturally, rescuing a cat was not something they expected to do when coming to the stadium Saturday. Nor was having a cat pee on them from above.

It took the cat about two to three minutes to fall off the upper deck, and the fans’ anxiety levels increased throughout. Many witnesses said it was the strangest thing they’d seen at a football game.

There has been no update on what happened to the cat after it was saved.