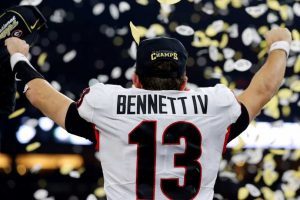 INDIANAPOLIS – Stetson Bennett could have been the answer to a trivia question for the wrong reasons.

Who was the Georgia quarterback who fumbled on one of the most-controversial calls in College Football Playoff history?

That nearly happened to Bennett with 11:35 remaining in the fourth quarter of the 2022 College Football Playoff championship game between No. 1 Alabama and No. 3 Georgia at Lucas Oil Stadium on Monday.

Bennett was pressured by Alabama linebacker Christian Harris, who wrapped up for the sack. Bennett appeared to pass the ball forward, and Crimson Tide defensive back Brian Branch casually scooped the ball up as it bounced off the turf.

Fumble? Yes, the play was ruled a fumble. The call stood after a booth review, and the Crimson Tide scored the go-ahead touchdown. It felt like the next gory chapter in the 41-year-old horror story since the Bulldogs’ last national championship. This could have been the college football equivalent of the “Tuck Rule.” Only Bennett didn’t feel that way.

“I knew that once I fumbled the ball I was not going to be the reason we lost this game,” Bennett said. “The fumble was not cathartic. The fumble, that was just football. I put my head down and said, ‘That’s not going to be how we lose this game.'”

The walk-on quarterback who transferred to junior college but found his way back to Georgia again led back-to-back touchdown drives. Bennett now is the answer to a trivia question for the right reasons.

Who was the offensive player of the game for Georgia in a 33-18 victory against Alabama in the CFP championship game?

Bennett will forever be that folk hero in Georgia (14-1) now. The Blackshear, Ga., native grew up a Bulldogs fan. He heard legends about Buck Belue, Lindsay Scott, Herschel Walker and 1980. He listened to legendary Georgia announcer Larry Munson highlights, albeit on YouTube. At media availability on Saturday, Bennett said he crossed over from fan to player.

Georgia coach Kirby Smart was asked if five years ago he would have believed Bennett, who was a scout-team quarterback when the Bulldogs played Alabama in the CFP championship game, could lead a national championship run.

“I’d have thought, hell yeah, we won a national championship,” Smart said. “I’d have been pumped. Five years ago he was delivering passes like Baker Mayfield against the scout team. There’s a lot of guys that saw him on that scout team make plays with his feet, his arm whip and decision making, and we were very impressed.”

On two drives following the fumble, Bennett hit 4 of 4 passes for 83 yards and two TDs against Alabama (13-2), which had won seven straight against the Bulldogs.

After the fumble, Bennett marched Georgia down to the 32-yard line in three plays before taking a sack from Christian Harris. On the next play, Bennett stuck a 40-yard TD pass to Adonai Mitchell over Alabama defensive back Khyree Jackson that gave Georgia a 19-18 lead.

After a three-and-out, Bennett led the closing-time drive. The Bulldogs stuck with the ground game for six of seven plays, and that set up a third-and-1 pass in which Bennett faked the hand off to the right and hit a wide-open Brock Bowers on the other side for a 15-yard touchdown. That left running back Zamir White in awe.

“The one thing that stood out to me was Stetson,” White said. “Like just seeing him like just have all this pressure on him, all the crowd noise and him going through that and fighting it out and just seeing him just cry, just tears of joy, man. It was really priceless.”

Kelee Ringo intercepted Bryce Young with 54 seconds left and returned it 79 yards for a TD. That was the end of a remarkable 20-point swing after what could have been an all-time disaster.

Bennett finished 17 of 26 for 224 yards and a pair of TDs. Young finished 35 of 57 for 369 yards, a TD and two interceptions. Young finished the season with the Heisman Trophy and led Alabama to the 41-24 victory against Georgia in the SEC championship game.

Bennett, however, won the rematch. When that became clear, he might have crossed back over to being a fan. Bennett, like no doubt so many Georgia fans in the stands and in their living rooms, cried on the sideline.

“I hadn’t cried in, I don’t know, years, but that just came over me,” Bennett said. “That’s what – when you put as much time as we do into this thing, blood, sweat, tears, it means something.”

Bennett smoked a cigar. He was asked what will be the first thing he’ll do when he get backs to Athens.

“Well, I think we might celebrate a little bit tonight here in Indy first,” Bennett said.

“If we can ever get out of here,” Smart followed.

It’s a celebration at Georgia for the ages, and Smart’s faith in Bennett made it happen.

There is no question about that.