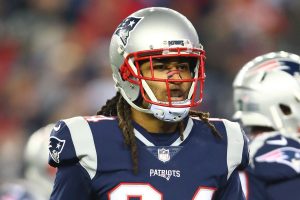 The Patriots are getting Cam Newton back this week, but you can’t say the same for Pro Bowl cornerback Stephon Gilmore.

Monday marks the start of the team’s mandatory three-day minicamp. After Newton suffered a hand injury at OTAs on June 4, Bill Belichick said the quarterback will be at minicamp and noted the veteran practiced last week on Friday when the media wasn’t in attendance.

“Yeah, he practiced last week. I’d expect him this week, too,” Belichick said of Newton.

According to the Boston Globe, Gilmore won’t be in attendance in Monday’s practice. The cornerback hasn’t been with the team for OTAs. This could be an excused absence if it’s due to inclement weather with Gilmore’s flight. However, if the former defensive player of the year is holding out, he’ll be fined per missed practice. If Gilmore misses all of minicamp, it’ll cost him $93,085.

On Monday morning, Belichick started his news conference off by saying there were some travel issues due to the weather.

“Had a little weather here. We’re working through some travel arrangements so we’ll see what the full level of participation is here today and for this week,” Belichick said. “I’m sure we’ll have a pretty full roster. It’s good to see a couple new faces here.”

When asked if Gilmore was in Foxboro, Belichick was evasive in his answer.

“We’re scrambling to get things going this morning, so I didn’t really get a chance to see everybody myself, so we’ll see where we’re at,” Belichick said when asked if the cornerback was present.

When asked about Gilmore not participating in OTAs and about his importance to the defense, Belichick said, “We’ll there’s a lot of players we haven’t seen in OTAs. All the players are important and we’d like to have all of them.”

Gilmore restructured his contract last year with the Pats and the new deal moved $4.5 million of his 2021 salary up to 2020. That, however, left Gilmore with a $7 million base salary for this season.

Gilmore is coming off a season-ending quad injury that required surgery.