Home » NFL » State of the Franchise in 2021: Buccaneers run it back to go back-to-back

State of the Franchise in 2021: Buccaneers run it back to go back-to-back 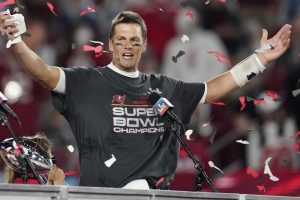 Where does your franchise stand heading into 2021? Adam Rank sets the table by providing a State of the Franchise look at all 32 teams, zeroing in on the key figures to watch and setting the stakes for the season to come.

Members of the Buccaneers organization, Bucs fans around the world and those whose heart skipped a beat when Tom Brady tossed the Lombardi Trophy to another boat during the victory celebration:

You have a lot to celebrate — or you did. But now it’s time to get back to work. As your coach so eloquently put it back in March, the 2021 Buccaneers haven’t done [expletive]. That said, a whole lot of players on the 2021 roster just did [expletive]. In fact, Tampa Bay’s bringing back nearly every contributor from last season’s championship squad, including all 22 starters. Some people thought this whole NBA-style “super team” wouldn’t work in the NFL. Those people were wrong. Can Brady’s Bucs make them doubly wrong by becoming the first NFL group to go back-to-back since … Brady’s Pats? That’s the question for the title team that returns everything.

How the Buccaneers got here

Let’s take a quick look back at the highs and lows of the 2020 season. And with the reigning Super Bowl champs, we’ll get the low points out of the way first.

Head coach: Bruce Arians. I’m not sure we can be friends if you weren’t happy for my guy Bruce last season. There are a lot of great coaches in the NFL who deserve to win a Super Bowl, but I was especially pleased seeing Arians hoist the Lombardi Trophy this past February. He had this long, storied career as an assistant coach, but for a while, it looked like he would never get a chance to serve as a head man. When Chuck Pagano’s cancer diagnosis forced Arians into the big chair, he was selected as Coach of the Year. An honor he doubled down on two years later as head coach of the Arizona Cardinals. After hanging up the whistle following the 2017 campaign, Bruce was amazing as a game analyst for CBS, but he just couldn’t stay away from the sideline. And now he’s out there living his best life. Swigging beers in a victory parade. Getting inked up. I don’t know, man — I don’t think there’s anybody out there enjoying himself more. And Arians seems like the perfect leader for this collection of talent on the field.

Quarterback: Tom Brady. I always seem to run into people who want to tell me why Tom is NOT the G.O.A.T. Like anybody could switch franchises in the midst of a global pandemic — with unprecedented restrictions on team activities — and promptly collect a seventh ring for his collection. Yes, he was surrounded by talent. He was also 43 freaking years old. And the Bucs had posted three straight losing seasons before Brady’s arrival. Like, what are we doing here? I like to carry myself with a personal level of politeness, but sometimes it gets tested when people try to debunk TB12’s greatness. I could spend the rest of this file explaining, point by point, why Brady’s the G.O.A.T., but what’s the point? What really is left to be said? How many of the all-time greats in NFL history won Super Bowls with one franchise and then left to do it with another? ﻿Joe Montana﻿ got the Chiefs to the AFC title game. OK, ﻿Peyton Manning﻿ sort of did it. He was the starting quarterback of the Super Bowl 50 champion Broncos, but even ﻿Trent Dilfer﻿ had more big-time throws in his Super Bowl win than Manning did in his final NFL game. And I don’t mean to use this space as an opportunity to bash Manning while putting Brady over, but Brady was out there like a dude half his age, dealing in that blowout win over ﻿Patrick Mahomes﻿’ Chiefs. You can’t deny this. I mean, some of you will. Because haters gonna hate. But he’s the best.

Projected 2021 MVP: Devin White, linebacker. While Brady got all the headlines — understandably so, considering he is the G.O.A.T. — White really announced his presence during the title run. His Super Bowl interception of Mahomes didn’t exactly put the game away, as the Bucs already had it in the bag, but it was the perfect finishing move. Like dropping a Rock Bottom on Mahomes and Co. Devin was a second-team All-Pro last year, and it feels like he’s about to become one of the best players in the league. Not just players at his position — best players overall.

2021 breakout star: Tristan Wirfs, right tackle. It’s not easy for a lineman to break out. Pancakes don’t earn fantasy points. But I want to take a moment in this VIPs section to shine the spotlight on Wirfs, who played every single offensive snap for Tampa last season, from Week 1 through the Super Bowl. It’s one thing to expect Brady to roll down to Florida and do the job — he’s the greatest for a reason, after all — but I think we’re kind of overlooking how impressive Wirfs was during his rookie season, and how big a role the offensive line played in that Super Bowl run. I mean, just look at the duress Mahomes was forced to play under during that game. So, how does Wirfs break out in Year 2? A Pro Bowl nod feels quite doable.

New face to know: Kyle Trask, quarterback. I can hear you now: “We all buried the Packers a year ago for drafting a quarterback while Aaron Rodgers was in ring-hunting mode.” But it’s not like the Bucs traded up in the first round to snag a signal-caller. They have all 22 starters returning from last year. And, you know, even though Brady did just sign an extension through 2022, the guy’s turning 44 in August. I do like Trask, though. He was second in the FBS with 26 TD passes of 10-plus air yards, per Pro Football Focus. He also had the most big-time throws of any quarterback in the FBS by PFF’s count. And with, presumably, at least two years to marinate on the bench, this feels like a pretty wise stab at the position for the Bucs.

The competitive urgency index is: HIGHEST POSSIBLE EVER. You’re all in. Not only because Brady’s spitting in the face of Father Time, but the defensive front has three starters (﻿Jason Pierre-Paul﻿, Ndamukong Suh and William Gholston﻿) set to hit free agency next offseason. Meanwhile, Rob Gronkowski is year to year. Chris Godwin﻿’s on a franchise tag. This team is here to do one thing and one thing only: Win the whole damn thing. Again.

Will the Buccaneers be able to …

Manage the expectations of being reigning Super Bowl champions? I mean, it’s a fair question. The Buccaneers were loaded the last time they won a Super Bowl, 18 years ago. I even remember ﻿Warren Sapp﻿ telling me that once you feast at the king’s table, you want to get back there again. But the 2003 Bucs finished 7-9 and failed to make the playoffs, let alone the Super Bowl. Granted, the quarterback of that Bucs team was Brad Johnson. And no disrespect to him, but Brady might have the edge there. Brady was the last QB to lead his team to back-to-back Super Bowl wins. I almost mistakenly wrote “appearances” there, and it would have been wrong, because ﻿Patrick Mahomes﻿ just did that. The Chiefs might be the better example for how hard it is for teams to repeat in this league. But the Bucs remain the best squad in the NFC right now.

Figure out who the starters are? I say this in jest. Kind of. Arians told reporters two months ago, “There are no starters. This is a new football team. I made that message clear when they left, that that team won the Super Bowl. This team hasn’t done [expletive].” Which is why I really like Tampa’s chances of returning to Super Bowl Sunday. These Bucs, from the front office to the coaches to the players, really seem to have a sense of what it’s going to take to get back to the promised land. And if I might expand here, I’d really love to know who is going to be running the ball. Because ﻿Leonard Fournette﻿ (who looks amazing in his old No. 7) and ﻿Ronald Jones﻿ were good last year, but I thought it was kind of an underrated move to bring in ﻿Giovani Bernard﻿, who really helped me in fantasy last year. And that’s kind of the reason I’m (selfishly) asking this question.

Make Jaelon Darden a name to know? To be frank, there aren’t a whole lot of question marks with this roster. But I do want to talk about Darden. I’ll be honest: I wasn’t too familiar with the North Texas product coming into draft season. But my friend Chad Reuter loves him. And looking at the tape, it’s easy to see why. I’m not saying he’s going to go out and win you a fantasy championship this season. But he feels like the kind of guy who will end up making a big play in a big game at some point in the 2021 campaign.

… people are overlooking: How truly incredible the defense was last year. Especially during the playoffs. I mean, you’re not going to be able to get much credit when Brady and Gronk are out there doing their thing, but the defense was just unbelievable. Like, if you ever saw Ocean’s Eleven, the two main stars were obviously George Clooney and Brad Pitt. But it’s really Carl Reiner who steals the show time and time again. Everyone knows this. That’s what the Bucs’ defense did last year. In Tampa’s playoff run, the unit frustrated ﻿Drew Brees﻿, ﻿Aaron Rodgers﻿ and ﻿Patrick Mahomes﻿ in consecutive games. I don’t think there has been a trio of quarterbacks vanquished, in order, like that. Maybe ever.

… people are overthinking: That Julian Edelman is about to pull a Gronk. The poor guy can’t even settle into his Hall of Fame candidacy without people just assuming he’s going to the Buccaneers. Even I initially attempted to conjure up some jokes on the matter in this space. And Edelman’s been forced to repeatedly announce that he is indeed done playing. No, seriously! It’s like the guy who declines a party invite and nobody believes him until he doesn’t show up — like he said would be the case all along. And even as I’m writing this, I’m still thinking about what Edelman’s going to look like in a Bucs uniform. But, no! I’m going to respect his earnestness. He’s not returning. But ﻿Antonio Brown﻿ is. So let’s move on from this faux-retirement topic. Well, until the Bucs need a kicker and we get rumors of ﻿Adam Vinatieri﻿ giving it one more run.

For the 2021 season to be a success, the Buccaneers MUST:

I love what the Buccaneers are doing. More teams should be following this model. I know you can’t sign Tom Brady every year. Or maybe you can. Dude will probably play until he’s 60. But I digress. The Bucs have put all of their resources into this short window to win as many championships as possible. And if this sounds like I’m taking a shot at the team Tampa eliminated in the NFC title game last season, well, I am. More teams should take the Buccaneers’ approach.