Home » Starting five: Kansas has golden opportunity against Baylor, but will it capitalize?

Starting five: Kansas has golden opportunity against Baylor, but will it capitalize? 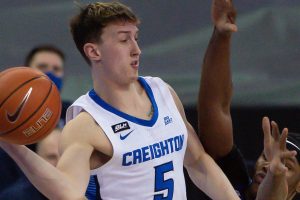 With Selection Sunday now just over two weeks away, the sense of urgency around college basketball is ramped up. Teams whose place in the NCAA Tournament is secured want to be playing their best heading into the Big Dance, while those in need of more positive results to earn their spots look to make a final push.

The last Starting Five of February features top-25 clashes in the Big 12 and Big Ten that fall into the former category, as well as a few bubble dwellers whose opportunities are running short.

Here are this weekend’s top games:

The Bears aren’t likely to fall from the 1-seed line regardless of how their stretch run in the Big 12 goes, but their two-week COVID-19 pause dinged their air of invincibility a bit. The Jayhawks, despite seeing their five-game winning streak snapped at Texas on Monday night, are playing as well as they have since the calendar turned to 2021. A win against Baylor could boost KU back into the top-16 picture. David McCormack’s strong play of late on the inside for the Jayhawks has helped open things up for Ochai Agbaji, but defending Jared Butler and Baylor’s perimeter-oriented lineup will again be a challenge.

The Buckeyes once again host the Sunday spotlight game, and it has the potential to be as aesthetically pleasing as last week’s showdown with Michigan. OSU came up short against the Wolverines and lost at Michigan State on Thursday, but a top regional seed is still in play. There are few guaranteed wins in the Big Ten, however, and the Hawkeyes would love to notch another quality victory. It’s a brutal stretch for Iowa, which lost at Michigan on Thursday night, but having shooting guard C.J. Fredrick back in the lineup has helped take the scoring burden off Luka Garza. Iowa’s interior defense has shown some improvement, but the Buckeyes’ E.J. Liddell should still get good looks in the paint.

Alex O'Connell and Creighton are on a four-game winning streak heading into their matchup with Xavier. (Photo: Steven Branscombe, USA TODAY Sports)

No. 11 Creighton at Xavier

The good news for Xavier, which has dropped three of its last four including Wednesday night’s setback at Providence, is not many of its neighbors on the upper edge of the bubble have distinguished themselves, either. The Musketeers could make up for those recent stumbles with a victory Saturday, but the Bluejays come in hot on a four-game winning streak that includes a takedown of Big East kingpin Villanova. The Musketeers might not have the fire power to keep pace if Creighton’s Marcus Zegarowski and Denzel Mahoney start raining threes, but Zach Freemantle could control the lane for Xavier.

No. 9 Florida State at North Carolina

Give Roy Williams credit for being flexible in this most unusual of seasons. He didn’t want his young Tar Heels heading into this important contest cold, but the plan might have backfired in the form of Wednesday night’s loss to Marquette. The damage can be undone, however, if UNC can find a way to topple the Seminoles, now ahead of the field in the ACC. UNC’s problem – and it’s a big one – is it has nowhere near the depth to match FSU’s. With nine players averaging double-digit minutes, Leonard Hamilton is never afraid to utilize his bench. The Tar Heels’ front-court trio of Armondo Bacot, Garrison Brooks and Day’Ron Sharpe must control the glass while avoiding foul trouble.

This is the second of a key weekend series in the Mountain West. The Aztecs won the opener Thursday, 78-66 in overtime. Both teams are in decent postseason shape but neither can afford a sweep. The Aztecs aren’t dominating the league as they did a year ago when Malachi Flynn put together an All-America season, but Brian Dutcher has built quickly around forward Matt Mitchell and sharpshooter Jordan Schakel. The Broncos will counter with high-scoring veteran Derrick Alston and versatile forward Abu Kigab.