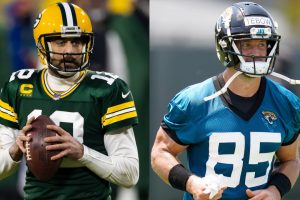 The NFL offseason program has been dominated by calls for boycotts of voluntary workouts and informal negotiations between players and coaches to ease practices. We had walk-throughs in flip-flops in Miami and ﻿Tom Brady﻿, who gave an impassioned speech during a players’ union call about modifying offseason programs, throwing to teammates at Bucs headquarters, without coaches present — an offer Bruce Arians made to ensure that if a player was hurt during the workouts, his contract would be protected because he was at the team facility instead of off-site.

But the next few weeks will be different. With the offseason winding down, teams will hold their mandatory minicamps, although the Indianapolis Colts actually negotiated to forego the camp in favor of two weeks of workouts. While turnout of players has been high around the league for much of the offseason, the minicamps are the only truly required part of the offseason schedule. That means they are worth watching to get a progress report on the biggest offseason issues as teams gear up for training camp. Coaches were convinced last year that the lack of in-person work throughout the offseason because of pandemic-related restrictions impacted the quality of play. We’ll see if that’s true this season, but we know that these minicamps will give us plenty to think about until teams reconvene to kick off training camp in the last week of July.

1) Who shows up? There is absolutely no reason to believe that the stalemate between Aaron Rodgers and the Packers will be resolved in time for him to be at the Packers’ mandatory minicamp, which starts June 8. Rodgers faces a possible fine of more than $95,000 if he skips the camp. In the meantime, this is a time for Jordan Love to get a lot of intensive coaching and intensive scrutiny. Teammate Aaron Jones said Love was a lot more comfortable in OTAs and coach Matt LaFleur said the ball was “jumping out” of Love’s hand. With no one quite sure how the Rodgers imbroglio ends, Love’s minicamp performance will only add another element to the story that has swallowed the offseason. The end of minicamp on June 17, though, is an important milestone for the Packers. That’s when the clock will really start ticking on the standoff, with training camp less than six weeks away.

2) And where? This one applies to receiver Julio Jones﻿, who declared in a conversation with Shannon Sharpe on FS1’s Undisputed — possibly unaware that he was on live television — that he was “out of there” from the Atlanta Falcons and wanted a trade to a winner. With NFL Network insider Ian Rapoport reporting that Jones asked the Falcons for a trade months ago, it seems only a matter of when, not if. The Falcons’ precarious salary cap situation will get some relief now that a trade — assuming one happens — will take place after June 1, when the Falcons can split the salary cap hit over the 2021 and 2022 caps. There’s no shortage of playoff-caliber teams that could use Jones, and that would make their quarterbacks very happy. Expect Jones’ market to heat up starting now and perhaps stretching all the way to training camp.

3) How do the quarterbacks look? This is, of course, a league-wide obsession. The rookie quarterbacks will get long looks, but the real intrigue will come with those quarterbacks recovering from injuries and with potential starting decisions looming. So, ﻿Tom Brady﻿ (knee — expected to have a very light load, according to Bruce Arians), ﻿Dak Prescott﻿ (knee), ﻿Patrick Mahomes﻿ (turf toe) and ﻿Jimmy Garoppolo﻿ (ankle) will draw special scrutiny, although all are expected to be just fine for the start of training camp. Further afield, there are big decisions looming. How is ﻿Jameis Winston﻿ looking, and what about ﻿Taysom Hill﻿ in New Orleans? How is ﻿Tyrod Taylor﻿, the presumptive starter in Houston, if we assume that ﻿Deshaun Watson﻿, under league investigation for a string of allegations of sexual assault and inappropriate conduct (and with an outstanding trade request) will not be with the team when training camp begins? What about the progress of the Dolphins’ ﻿Tua Tagovailoa﻿, who admitted last week he didn’t have a great handle on the playbook last season? Is ﻿Teddy Bridgewater﻿ an immediate threat to supplant ﻿Drew Lock﻿ in Denver? And maybe the most intriguing situation this side of Wisconsin: Does ﻿Cam Newton﻿ look any better than he did at the end of last season and — relatedly — what is the timeline for Mac Jones?

4) The Bucs: When last season ended with a Super Bowl championship, the Bucs’ offense was still running at a practice rep deficit because of the 2020 offseason. The offense, in fact, hadn’t really found its groove until after the Bucs’ Week 13 bye, after which they scored fewer than 30 points just once. Minicamp will give us an early look at how the offense will evolve now that Brady and company have had work together, even if Brady himself is limited, particularly because the Bucs are in the extraordinary position of returning every single starter from the championship roster. There is a long-held belief in the NFL that teams can’t simply run things back — they need to continue to evolve and add more talent and fresh competitive juice. The Bucs are going to be a fascinating experiment.

5) Tim Tebow: Whether you are delighted or disgusted by the Jaguars’ decision to give Tebow a shot at tight end as he nears age 34, there is no question that Tebow’s pursuit is an intriguing storyline, particularly because the Jaguars don’t have much at tight end. So far, the most we’ve seen of Tebow was him working on the JUGS machine. Tebow appears to be in superb shape, he is a gifted athlete and he is fiercely competitive — nobody can question that. But minicamp will provide an early answer to the most important question: Can he catch and block? With teams allowed to bring 90 players to training camp, Tebow will almost certainly not be cut before then, but what we see from Tebow now will give us our first clue about whether this is a quixotic quest or he has a legitimate chance to develop into a viable tight end, and earn a spot on the roster or practice squad.

6) The state of the vaccine: When the NFL overhauled its COVID protocols for vaccinated players — no more masking or daily testing, no restrictions on travel, no more social distancing with vaccinated teammates, no quarantine necessary even if a player comes in contact with someone who has COVID — it intentionally created a powerful incentive for them to get vaccinated. Considering that if a player gets a two-dose vaccine, it will take more than a month for him to be fully vaccinated, minicamps will be an interesting marker for how many will be vaccinated by the time training camp begins.