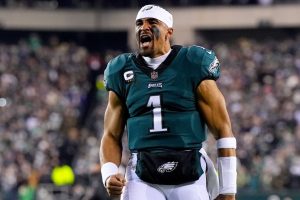 PHILADELPHIA — Eagles coach Nick Sirianni compared Jalen Hurts to Michael Jordan when asked about the emotional lift the quarterback provided the team in its 38-7 romp of the New York Giants in the NFC divisional round playoff game Saturday night.

“I know this is high praise, but to have him out there is like having — I shouldn’t even go there — it’s like having Michael Jordan out there,” Sirianni said. “He’s your leader. He’s your guy.

“Hopefully, that’s the biggest respect I can pay to him, comparing his ability to being on the field to a Michael Jordan type. This guy leads. He brings this calmness to the entire team. He plays great football. He’s as tough as they come. To me, nobody has played any better football than him this year.”

Hurts threw for two touchdowns and ran for another despite playing through a sprained sternoclavicular (SC) joint in his throwing shoulder, an injury suffered at the Chicago Bears on Dec. 18 that sidelined him for two games.

According to the Fox broadcast, Hurts said before Saturday’s contest that he is “nowhere near 100 percent,” adding that he also came down with an illness late in the week.

“Good enough,” Hurts said when asked how he felt physically during the game.

The Eagles largely stayed away from designed runs in Hurts’ return from injury in the regular-season finale against New York, but they dialed up six designed runs for him in the first half alone on Saturday, according to ESPN Stats & Information. The offense got back to its explosive ways, and Philadelphia racked up 268 yards and three touchdowns on the ground.

The mentality of the team was set during the week, Eagles tight end Dallas Goedert said, when Hurts addressed the players during a team meeting, telling them, “I ain’t hungry; I’m starving for this s—.”

“With everyone in the locker room, he sets the tone for it, and we follow along. Whatever he says goes. He is the leader of this place,” Goedert said. “He had it in him, so we all follow suit.”

After dropping two of their final three games to finish the regular season, the Eagles are back up and rolling just in time for next Sunday’s NFC Championship Game. They’ll face the winner of the divisional round game between the Dallas Cowboys and San Francisco 49ers.

Speaking of this Eagles team, Hurts said there is a “special type of togetherness that we have, and I don’t think it’s something that I’ve experienced quite like this — for sure on the NFL level.

“We’re not just hungry for it; we’re starving for growth, getting better and learning from our mistakes. I think that’s a beautiful thing, and that was a little motivation as a team. We wanted to come out and play our best ball.”