Home » NFL » SEC spring football preview: Alabama still on top, but what can we expect from the rest of the league?

SEC spring football preview: Alabama still on top, but what can we expect from the rest of the league? 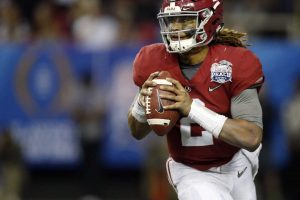 College football is getting back into the swing of things little more than one month after Alabama beat Ohio State to capture the national championship.

Teams will return to practice fields this month for spring drills as the Football Bowl Subdivision turns to the 2021 season. Every program continues to work with safety protocols established to meet the demands of the COVID-19 pandemic while introducing incoming recruits and transfers to rosters set to balloon over the 85-scholarship limit.

Over in the SEC, the Crimson Tide looks to defend their national championship while the rest of the conference plays for second place.

Where things stand heading into the spring for the SEC:

Biggest question: Can Bryce Young pick up where Mac Jones left off?

Barring the unexpected, Young will replace Jones as Alabama's starting quarterback and bring more mobility to the position. Jones leaves enormous shoes to fill. Is Young up to the challenge? His legs will bring a different dimension to the Tide's offense but there are some big names to replace at the skill positions, including the reigning Heisman Trophy winner in receiver DeVonta Smith.

Quarterback Bryce Young is expected to start for Alabama, the defending SEC champion and national titlist.

Biggest question: Can the Razorbacks average 30 points per game?

Six teams did so against a conference-only schedule in 2020, so reaching the 30-point mark is within range for an offense that averaged 25.7 points per game a year ago. With very good options at running back in Smith (710 rushing yards) and at wide receiver in Burks (810 receiving yards), the key may be developing projected starting quarterback KJ Jefferson, last year's backup to Feleipe Franks.

Biggest question: Will coach Bryan Harsin get the most out of Nix?

An up-and-down freshman season was followed by an uneven sophomore campaign for Nix. The hope is that new coach Harsin can maximize his skill set and bring some balance to an Auburn offense that ranked eighth in the SEC last season in yards per play. Harsin was a strong developer of quarterback talent at Boise State.

Probably not, though there are some major changes. There'll be a new quarterback in Jones, replacing Kyle Trask. Last year's offensive coordinator, Brian Johnson, took a job in the NFL. The Gators will need to replace tight end Kyle Pitts and leading receiver Kadarius Toney. Of these changes, Jones' ascension to the starting job might influence the biggest change to Dan Mullen's scheme given his ability as a runner.

Biggest question: Is this the best team in the SEC?

It's not hard to make that case. The Bulldogs will benefit enormously from quarterback JT Daniels' decision to return in 2021 after a very strong run as the starter over the second half of last season. There is tremendous talent and depth at the skill positions and the front seven on defense. One concern is the defensive backfield, which is very inexperienced at cornerback and will need to be rebuilt on the fly by new secondary coach Jahmile Addae.

With last year's starter (Terry Wilson) off to the transfer portal and a new offensive coordinator (Liam Coen) set to install a different scheme, Kentucky will eventually evaluate three names at quarterback. For the spring, however, it'll be a two-player race: Beau Allen, who had seven pass attempts as a freshman in 2020, and former Auburn transfer Joey Gatewood. That's because Penn State transfer Will Levis won't join the program until the summer, likely putting him behind the eight ball when it comes to earning starting snaps come the regular season.

Biggest question: Can the defense find its footing?

The Tigers cratered on defense under short-term coordinator Bo Pelini, who lasted just one year in his second stint in Baton Rouge. His replacement, Daronte Jones, spent the last five seasons in the NFL but previously worked alongside former LSU coordinator Dave Aranda at Wisconsin. Jones' most important job: bringing confidence back to a unit embarrassed by its performance in 2020. With optimism around the potential of the LSU offense, even an average showing defensively could lift the Tigers back into a New Year's Six bowl.

Biggest question: Can the defense repeat 2020?

The biggest question marks heading into coach Mike Leach's second season come on offense, which tells you how inept the offense was last year amid the rising reputation of a defense that far exceeded expectations. Given the uncertainty on the other side of the ball, the Bulldogs' clearest path toward bowl eligibility requires another solid performance from the defense and its biggest stars, such as Brule, Forbes and linebacker Tyrus Wheat.

Biggest question: Will it be by-committee in the backfield?

After running back Larry Rountree III accounted for 209 carries last season, look for second-year coach Eli Drinkwitz to spread the ball around the Tigers' backfield in 2021. The leader will be senior Tyler Badie (242 yards), the only other back with more than 10 carries, who will have to adapt to a new role as Missouri's every-down back. Look for help from Dawson Downing, who ran for 227 yards in 2019, and a possible role for two incoming recruits from the 2021 signing class.

Biggest question: Will the defense make any noticeable gains?

A defense that did nothing well in 2020 needs to make up major ground to join an offense that is already one of the most electric in the SEC. Two areas in immediate need for improvement: the pass rush and forcing turnovers. The Rebels have enough athleticism on the edge to average more than 1.6 sacks per game, as the defense did in 2020. Forcing more turnovers (the Rebels had 13 last season) will make Ole Miss a threat to beat any opponent on the schedule.

In the short term, getting USC to five wins in 2021 would make Beamer's debut season a successful one and breathe life into the Gamecocks' recruiting efforts. Down the road, it's fair to ask whether the run of 11-win seasons a decade ago under Steve Spurrier represents a strange blip in program history or if getting back into SEC and national championship contention is fair to ask of a first-time head coach in the nation's most difficult conference.

Biggest question: How bad is it going to get?

New coach Josh Heupel walks into the unknown situation created by the NCAA violations committed under his predecessor, Jeremy Pruitt, and how those missteps may impact the Volunteers' postseason eligibility, scholarship count and more in the coming seasons. As if rebuilding the program into an SEC contender wasn't hard enough. What Heupel does have going for him is a reputation for developing quarterbacks and scoring points, two things Tennessee hasn't done well in years.

Biggest question: Are the Aggies headed to the playoff?

The disappointment of coming close but just missing last year's playoff field could motivate the Aggies to leave no doubt in 2021, though that would demand a win against Alabama and a West division championship. A&M must first find a replacement for quarterback Kellen Mond, a multiple-year starter. Look for Jimbo Fisher to evaluate several options but eventually land on second-year contender Haynes King, the backup in 2020.

Biggest question: Can Vanderbilt win two in the SEC?

Winning one SEC game wouldn't be shocking — the Commodores had three single-digit losses in 2020. Winning a pair under new coach Clark Lea may be difficult given Vanderbilt's uncertainty on the offensive line and the new schemes being installed this spring on both sides of the ball. On defense, Lea will shift from a 3-4 base set to a 4-2-5, which he used in three very successful seasons as the coordinator at Notre Dame.