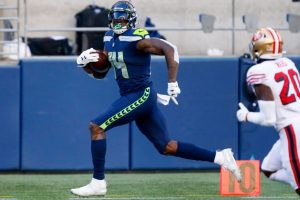 SEATTLE – DK Metcalf established his credentials as one of the NFL’s fastest players with his famous chase-down of Arizona Cardinals safety Budda Baker.

The Seattle Seahawks wide receiver will now test his speed against sprinters.

He’s competing in the USA Track and Field Golden Games and Distance Open, which is Sunday in Walnut, California. USATF’s website lists Metcalf among the participants in the 100-meter dash.

Metcalf hinted at this participation in the event in a tweet on Monday.

In addition to starring in football and basketball at Oxford High School in Mississippi, the 6-foot-4, 229-pound Metcalf was a standout hurdler and long-jumper. He ran a 4.33 40-yard dash at the 2019 scouting combine and reached a top speed of 22.64 mph when he chased down Baker last October, according to NFL Next Gen Stats. At the time, that was the second-fastest speed any NFL player had reached in pursuit in 2020.

Metcalf made the Pro Bowl last season after catching 83 passes for a franchise-record 1,303 yards.