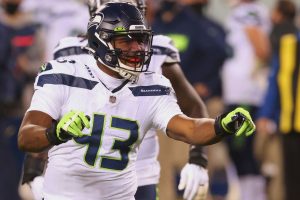 SEATTLE — Before re-signing with the Seattle Seahawks last month, veteran defensive end Carlos Dunlap wanted to make sure that Russell Wilson would still be their quarterback.

Dunlap said he got that assurance from Wilson himself.

Speaking with reporters via videoconference for the first time since returning to Seattle on a two-year deal, Dunlap paraphrased his conversation with Wilson.

“I did ask him if, obviously, he was going to be with us, because if I’m coming back, I’m coming back because I see him as my quarterback, and the rest of the team, I want to pick up where we left off,” Dunlap said Tuesday. “And he told me he’s with us and he’s here to stay, and he said, ‘Let’s go, Hawks.’ I’m not going to quote his every word. These words are not his words verbatim, but these are my explanation of how I interpreted what he said.”

ESPN’s Adam Schefter reported at the start of free agency last month that the Chicago Bears made “a very aggressive pursuit” of Wilson but were told that Seattle was not trading him at that time. The Bears were one of four teams that Wilson’s agent, Mark Rodgers, previously told Schefter that the quarterback would play for if the Seahawks were to deal him.

The others were the Dallas Cowboys (who have since extended Dak Prescott’s deal), Las Vegas Raiders and New Orleans Saints. A source told ESPN recently that Wilson does not plan to expand his list of teams. He has a no-trade clause that gives him veto power over any trade destination.

Wilson worked to encourage running back Chris Carson to re-sign with the Seahawks, a source told ESPN. Dunlap said he and Wilson were in regular communication during the time between when the Seahawks released Dunlap in early March to when they agreed to re-sign him 2½ weeks later, during the second week of free agency.

“A lot of teams showed interest, but only the true competitors really actually made offers,” Dunlap said. “But Seattle is where I wanted to be, so when the offer came from Seattle, I could tell you this: The deal was done within 24 hours from when they offered me to me signing.”

Dunlap’s two-year deal is worth $13.6 million with $8.5 million in guarantees. The two-time Pro Bowler was set to make $14.1 million before his release. Dunlap said the Seahawks made it clear to him when they acquired him in a trade with the Cincinnati Bengals last October that they might have to release him after the season. He cited that transparency as one of the reasons he wanted to return to Seattle.

“They were very transparent and that’s something I appreciate from Day 1 coming in. When we were doing the signing and the trade, they let me know that this would be a potential move in the [offseason], and then when it actually happened, yeah, it still hit different because I’ve never been cut before,” he said. “But they were still very transparent. They wanted me to know they wanted me back, just this was one of the moves they had to make because of the situation they were in cap-wise.”

Dunlap will continue to wear No. 43 with the Seahawks.

“I’m looking to pick up where we left off, and make it better,” he said. “That includes me keeping the same number. One of the things you guys will learn about me is I’m a creature of habit. I like to finish what I started, and I feel like I’ve got a lot of unfinished work to be done.”