Saints to spend Week 3 in Dallas, then go home 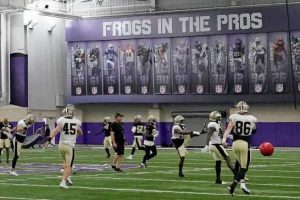 FORT WORTH, Texas — The New Orleans Saints will likely spend one more week practicing in Dallas before they return home to New Orleans following their Week 3 game at New England, according to coach Sean Payton.

The Saints have spent the past three weeks in the Dallas/Fort Worth area after evacuating for Hurricane Ida on Aug. 28.

Although their home practice facility and the Caesars Superdome avoided major damage, there were widespread power outages in the New Orleans area and a lack of other services for weeks after the storm. The Saints wanted to make sure life would be back as close to normal as possible for players and staff members when they returned.

The Saints’ Week 1 “home game” was moved to a neutral site in Jacksonville, Florida, where they routed the Green Bay Packers 38-3 last Sunday. New Orleans’ Week 2 and 3 games were already scheduled to be on the road at Carolina and New England, respectively. The Saints will make their actual home debut in the Superdome in Week 4 against the New York Giants.

The Saints spent their first week in Dallas practicing inside the Cowboys’ AT&T Stadium. They have spent the past two weeks sharing TCU’s facilities in Fort Worth. Payton presented TCU coach Gary Patterson with a game ball for the assist.

Payton said the Saints will likely leave early for New England on Sept. 24 since it’s a long-distance trip.