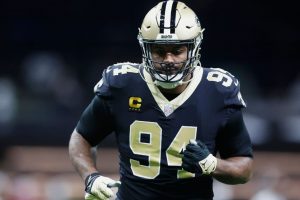 NEW ORLEANS, La. — New Orleans Saints defensive end Cameron Jordan has successfully appealed his $50,000 fine after he was accused of faking an injury against the Tampa Bay Buccaneers on Dec. 5.

In a text to ESPN, Jordan questioned why it took so long for the NFL to make a decision. His appeal was not heard until late December and the conclusion took several weeks after that.

Jordan also questioned the process, suggesting that the interviews and research into the situation take place before the fine is announced.

“Why isn’t the NFL “committee” or whomever wrote this memo about fining defensive players for being hurt ‘delaying the game’ have a team that looks into each situation, I.E. call the [team doctor] check for rehab situation, interview first before announcing a fine,” Jordan suggested.

Jordan has been adamant that he did nothing wrong and said last month that he felt his integrity had been questioned after the league accused him of faking the injury toward the end of an 17-16 loss to the Buccaneers. The Saints organization was fined $350,000, Allen $100,000 and Nielsen $50,000.

The Saints were leading the Buccaneers 16-3 in the fourth quarter when Jordan looked at the sideline and briefly went down on one knee. This occurred after he attempted to sack Buccaneers quarterback Tom Brady on third-and-17. Jordan fell to the ground on the rush attempt, got back up and then went to his knee, appearing to point to his leg before leaving the field with athletic trainers as the Buccaneers punted.

Jordan went into the injury tent and did not return until four plays into the Buccaneers’ next offensive drive. He later explained that he felt like he could not push off his left foot.

Jordan said he had to spend his next week rehabbing his swollen foot as the Saints had their bye and received an MRI, but returned to play against the Atlanta Falcons two weeks after the Buccaneers game.

“Here’s a whole MRI that says I was actually hurt, which was crazy, that somebody can tell you, not even how you feel, but how bad you’re actually hurt,” Jordan said before the Falcons game. “To address, not even the elephant in the room, the apparent fine that you can catch while being hurt, sorry I tweaked something in my foot?”