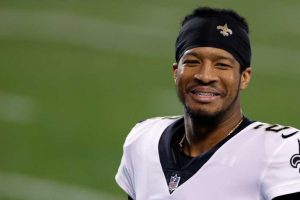 First, it was a 43-yard bomb down the middle of the field from Winston to Callaway. Then it was a quick 29-yard strike near the left sideline, capped off with a one-handed grab for another score. When the two walked off the field in the first quarter on Monday, both had done some serious damage against the Jaguars in their preseason game.

Winston finished 9-10 with 123 yards and his two touchdowns and Callaway caught all five targets for 104 yards and the scores.

Oh, and that first pass from Winston went 53.3 yards in the air, the farthest of any passing touchdown by a Saints quarterback since 2016, according to ESPN Stats & Info.

Winston is in the midst of a battle with Taysom Hill to become the quarterback who replaces future Hall of Famer Drew Brees in New Orleans. Winston has the experience and pedigree as the 2013 Heisman Trophy winner and first overall pick in 2015 by the Buccaneers. He finished his Tampa Bay career with a 28-42 record, as he completed 61.3 percent of his passes for 19,737 passing yards, 121 touchdowns and 88 interceptions. He appeared in four games and completed 7 of 11 passes for 75 yards last year as one of the Brees’ backups.

While Saints fans certainly know Winston’s name, Callaway is a bit more of a new face: He appeared in 11 games last year for the Saints and caught 21 passes for 213 yards and no touchdowns in his first NFL season. He had been signed by the team before the season as an undrafted free agent. In four seasons in college with Tennessee, he caught 92 passes for 1,646 passes and 13 touchdowns.

Still, Callaway showed that he had some untapped potential. He posted a 38-inch vertical, 126-inch broad jump and ran a 4.55-second 40-yard dash in the 2020 NFL Combine. His draft profile called him a “one-trick prospect with field-stretching ability,” with the report saying he needs to be “more than an occasional deep ball threat if he wants to hold an NFL job.”

Many have already been eyeing the 6-1, 205-pound wideout as a potential sleeper, especially with Michael Thomas likely out for weeks during the season.