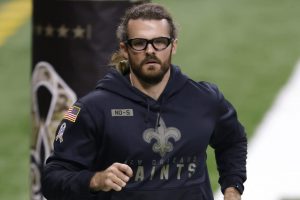 Salary cap requirements have forced the Saints to part ways with their longtime punter.

The punter was understandably emotional when he received the news and spoke with reporters following his release, which will save the cap space-needy Saints $2.5 million in 2021.

“I’m overwhelmed with gratitude and just thanks,” Morstead said. “The experience I’ve had with the Saints has been… There’s not one part of it that I would complain about. The whole thing has just been outstanding. And I’m obviously sad to be moving on from the team, but it’s not as if I haven’t prepared for this moment in a lot of different ways. But it is shocking.”

The Saints are attacking their unenviable salary cap position from every angle, restructuring or signing low-level players to new deals and dangling veterans on expiring contracts in trade talks. This move follows New Orleans’ successful restructuring of kicker Wil Lutz’s contract, which trimmed another $1.74 million from the Saints’ cap, per NFL Network Insider Ian Rapoport.

Morstead spent all 12 of his professional seasons with the Saints as their reliable punter, serving as a team captain since 2013 and reaching the Pro Bowl in 2012. As faces changed around him, Morstead remained in New Orleans, one of the last to stick around from the Saints’ Super Bowl XLIV-winning 2009 squad.

His production declined in 2020, though, finishing 32nd out of 34 qualifying punters in yards per punt. He did drop 23 punts inside the 20, and forced 29 fair catches, but the combination of age, low per-punt yardage average and the Saints’ significant salary cap needs were enough to produce his termination.

“I’m just grateful to all of you in the media,” Morstead continued. … “The season I had wasn’t to the normal standard that I’ve set. There’s a variety of reasons for that, and I just felt like you guys have always treated myself and my teammates with fairness and with integrity and I just appreciate that.

“All I’d like to say is New Orleans has been amazing to me. My family, we’re in the process of building our home right now here. This is home regardless of where the rest of my career takes me. My kids have all been born here and the fans and our support have just been exceptional.”

Morstead turns 35 in four days, and with punter landing low on the priority list for most teams, it’ll be interesting to see where he goes. Punters of a similar era (i.e. ﻿Dustin Colquitt﻿) have seen their employment become much less certain in the last couple of years, and finding a new team isn’t as simple as checking to see who has a vacancy.

With the lower salary cap, most teams might prefer to go with a younger, cheaper punter that can be found via the last round of the draft or undrafted free agency. We’ll learn in the months ahead if this is the last we see of Morstead.