Home » NFL » RB Index, Week 7: Which NFL teams should trade for a running back before the Nov. 2 deadline? 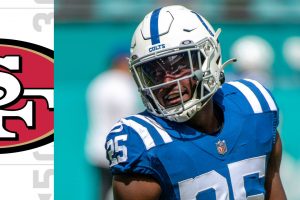 The injury bug has struck the running back position over the last few weeks. And while I hate to see talented players sidelined, it has provided others with opportunity.

With the Nov. 2 trade deadline less than two weeks away, organizations that have lost top rushers during the season have a chance to be in the market. And a guy like the Colts’ Marlon Mack, who officially went on the block in September, could be a nice piece to fill a backfield void. Or these teams can choose to just roll with what they already have on the roster.

Today, I’m evaluating the running back position for seven teams that have experienced backfield carnage. Should they look to make a deal before the trade deadline or stand pat? Let’s get to it.

Christian McCaffrey has not played since the second quarter of Week 3, thrusting Chuba Hubbard into the RB1 role, with Royce Freeman and fullback Giovanni Ricci completing the depth chart. In three starts, Hubbard has recorded 219 rushing yards, one TD and 51 receiving yards. The Panthers have struggled without McCaffrey, going 0-3 since his injury. Still, I think general manager Scott Fitterer and head coach Matt Rhule should stick with the group they have. Bringing in another starting-caliber back would make this position too crowded.

Don’t let the fact that the Bears worked out a number of backs earlier this week fool you. Leading rusher David Montgomery is eligible to return from IR in Week 8, and in the meantime, sixth-round draft pick Khalil Herbert has provided the Bears’ offense with a spark, rushing for at least 75 yards in each of the last two games, including 97 yards and one TD on 19 carries as the starter last week. The Bears might sign a player to the practice squad for depth, but there’s no real need to trade for another starter type.

It’s pretty remarkable that the Browns are expected to be without 98.8 percent of their passing and rushing yards on Thursday Night Football. That includes Nick Chubb, who missed Week 6 with a calf injury, and Kareem Hunt, who was placed on IR Tuesday with a calf ailment of his own. Not having Chubb and Hunt is a huge blow to the Browns’ top-ranked rushing unit. So, who’ll fill the void? Sixth-round pick Demetric Felton has chipped in as a receiver, a position he played in college, but has yet to have a carry. Third-year pro D’Ernest Johnson — who actually had a 13-carry, 95-yard outing last year against the Cowboys, though he’s logged just 20 offensive snaps this season — will also be in the mix. It feels pretty grim for Cleveland right now, but there’s no need to bring in another RB. Just get this group (and the O-line) healthy.

Clyde Edwards-Helaire is on IR with an MCL sprain, but Darrel Williams has fit the bill in relief, with veteran Jerick McKinnon also chipping in sparingly. While Williams hasn’t been quite as productive as CEH, the Chiefs are obviously a pass-heavy squad with Patrick Mahomes slinging it all over the yard. There’s no need to trade for a running back. If anything, this squad needs defensive help.

Saquon Barkley just can’t seem to stay healthy. After missing nearly all of 2020, a fluke ankle injury has sidelined Barkley since the first quarter of Week 5. Even if he’s back on the field sooner rather than later, the Giants need an insurance policy because Devontae Booker (3.0 yards per carry — 58th of 59 players with at least 30 carries) can’t be the sole back carrying the load. It’d be smart for Big Blue to make a trade for Tamp Bay’s Ronald Jones, a guy who would fit well in their system. But Bucs coach Bruce Arians just said his has no interest in trading the back.

Since losing Raheem Mostert for the season in Week 1, Kyle Shanahan’s ground attack has consisted primarily of rookie RBs Elijah Mitchell and Trey Sermon (and QB Trey Lance). Mitchell has battled injury, while Sermon … well … just hasn’t been it. The 49ers are quickly falling out of the division race with Arizona sitting pretty at 6-0, so they need to do something in the short term to change the tide. It’s worth giving Indy GM Chris Ballard a call about Mack, a dynamic one-cut runner who could provide a much-needed spark for San Francisco’s offense. ﻿﻿﻿

With Chris Carson (neck) on IR, Alex Collins was solid in Week 6 (101 rush yards vs. Pittsburgh) before a hip/glute injury forced him to exit before the end of the game. He has a chance to play against the Saints on Monday night. Fortunately, the Seahawks have depth at the position in Rashaad Penny (set to return from IR this week) and DeeJay Dallas (who flashed last season). This group should be able to hold down the fort until Carson’s eligible to return in Week 10.﻿﻿﻿﻿

Former NFL rushing leader and NFL Network analyst Maurice Jones-Drew will survey all running backs and rank his top 15 each week of the 2021 season. His rankings are based on this season’s efforts alone. Here is MJD’s list heading into Week 7.

Can ANYONE stop this guy? Henry ran right over the league’s top defense for 143 rush yards and three touchdowns. After Monday night’s spectacular performance, I think it’s safe to say Henry has officially entered the MVP conversation. I mean, the man is on pace for 2,609 scrimmage yards (would be an NFL record) and 29 scrimmage TDs in 17 games — a pace that’d give him 2,456 yards and 26 TDs over the old 16-game slate.

The Cowboys rolled into their bye week on a five-game win streak. That’s partly because of Zeke’s success, as he’s logged four straight games with at least 100 scrimmage yards (he had 97 in Dallas’ Week 2 win over the Chargers). The Cowboys are the NFL’s top overall offense and have the second-best rushing attack through six weeks. Everything is in sync with this offense right now.

After being limited vs. the Packers in Week 5, Mixon looked dominant against the Lions. He had a season-high 153 scrimmage yards (94 rushing, 59 receiving) and a receiving touchdown in the Bengals’ fourth win of the season. It’s easy to put up this production against a winless squad, but I’m eager to see if he can duplicate this output against division-leading Baltimore on Sunday.

Kamara should be ready to go coming out of the bye — and he can build on his last three games, having logged 100-plus scrimmage yards in each. It helps that he’s facing a Seahawks defense that ranks last in the league in yards allowed.﻿﻿﻿﻿﻿﻿﻿﻿﻿

Taylor is starting to heat up as we near the midway point of the season, having just gashed the Texans’ defense for 145 yards and two touchdowns on 14 carries. That’s 10.4 yards per tote. The Colts will always have a chance if Taylor plays the way he has over the last three games, in which Indy went 2-1, with the lone loss coming to Baltimore in crushing fashion.

﻿﻿﻿﻿﻿﻿﻿Getting that first win of the season had to feel good for the Jags. Robinson has been an instrumental part of the offense, scoring five rushing TDs over the last four games, including a 1-yard plunge in the third quarter against Miami to give Jacksonville its first lead of the game. This offense is starting to mesh, and the second-year back is a big reason why.

Cook returned in Week 6 after missing two of the previous three games, and he showed up big time with 140 yards on 29 totes in Minnesota’s overtime win at Carolina. Getting more rest on the Vikings’ bye week will help Cook be ready for a three-game gauntlet in Weeks 8-10 (vs. Cowboys, at Ravens, at Chargers).

A con of being a running back is you don’t see a lot of ground action when your team falls behind early. That’s what happened with the Chargers in Baltimore, and as a result, Ekeler managed just 7 yards on six carries — though he did catch four balls for 48 yards.﻿﻿﻿﻿﻿﻿﻿﻿﻿﻿﻿﻿﻿﻿﻿﻿﻿﻿﻿﻿﻿﻿﻿﻿﻿

﻿﻿﻿﻿﻿﻿While the Eagles neglected the run game Thursday night, the Bucs leaned on their starting running back more than they have all season. Fournette had a season-high 22 carries for 81 yards and a pair of TDs, while also adding six catches for 46 yards. This was one of Tampa’s more balanced offensive efforts this season.

Pittsburgh was smart to continue riding the rookie running back against the Seahawks, with Harris chipping in on the ground and through the air. He finished with 127 scrimmage yards on 30 touches, including a 5-yard TD reception to start the scoring in the first quarter. It’s not a coincidence that the Steelers’ offense has played better over the past two weeks with Harris getting more burn, and hopefully, they don’t forget to follow the working formula after the bye.

Henderson has provided the Rams’ high-flying offense with some balance in 2021. Averaging 4.6 yards per carry with five total TDs, he’s done his job filling in for the injured Cam Akers as a physical but versatile back.

Pollard had a reduced role in Sunday’s win over New England with 13 touches for 63 yards, including 4.1 yards per carry over 10 totes. There will be weeks when he doesn’t splash due to the sheer amount of talent on the Cowboys’ roster, but what matters is that he continues to be efficient.

Conner has slowly taken carries away from Chase Edmonds as the season has progressed. I still want to see more from the veteran back, but he’s been a huge asset for the Cardinals in the red zone, scoring five rushing TDs (second to only Derrick Henry).

Jacobs cracks the top 15 with a number of others falling out due to injury. He hasn’t found his stride quite yet in 2021, but with this Raiders team playing with a chip on its shoulder, Jacobs could take off at any moment.

The Ground Index presented by FedEx ranks NFL running back performances all season long. Check out the weekly FedEx Air NFL Players of the Week and cast your vote after Sunday Night Football.