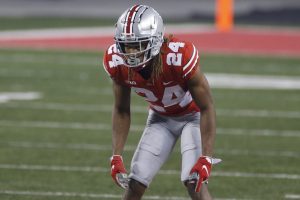 ﻿Shaun Wade﻿ ‘s draft slide ended Saturday when the Baltimore Ravens selected the Ohio State defensive back in the fifth round with the No. 160 overall pick in the 2021 NFL Draft.

Wade (6-foot-1, 196 pounds) played well enough for the Buckeyes as a nickelback in 2019 that he was considered among the best defensive back prospects in the college game. His draft stock suffered significantly, however, after he struggled with a move to outside corner in 2020.

“If he had come off what we saw in 2019, (he) probably is a second-round pick,” NFL Network draft analyst Daniel Jeremiah said on the broadcast. “(He) comes back in 2020, made the move from a nickel as an inside corner in 2019, where he played very well, to sliding outside, and just had a rough go of it.”

The former Buckeye is unlikely to have to play outside in Baltimore, though, as ﻿Marlon Humphrey﻿ and ﻿Marcus Peters﻿ have the outside CB slots locked up.

Although he possesses excellent size for an outside corner position, his tape suggests that a slot corner role at the pro level would suit him best. Still, NFL Media draft analyst Lance Zierlein believes he lacks the short-area footwork to stay with the quickest of slot receivers, and will need to improve his fundamentals and find the right scheme fit to reach his pro potential. Zierlein compares Wade to former Miami Dolphins CB ﻿Cordrea Tankersley﻿. Wade made six career interceptions and 12 pass breakups for his career.

Wade wore No. 24 at Ohio State in tribute to a close friend, Jacoby Wright, who was shot and killed in 2015.