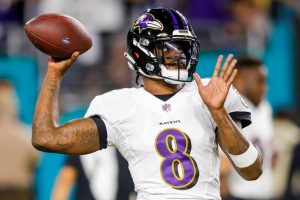 CHICAGO — Lamar Jackson is inactive for the Baltimore Ravens’ game at the Chicago Bears on Sunday because of an illness that is not related to COVID-19. His absence is the biggest hit to an already short-handed offense.

Jackson was considered “50-50” for the game after being added to the injury report Saturday, a league source told ESPN’s Adam Schefter. This came after Jackson said he was “feeling great” upon returning to full participation in Friday’s practice after missing two days.

Tyler Huntley, who went undrafted out of Utah in 2020, will make his first NFL start. He has completed 14 of 29 passes in the regular season and playoffs, throwing for 114 yards for no touchdowns or interceptions.

The Ravens organization was hit this week by an illness that is not COVID-19. Wide receiver Rashod Bateman and center Bradley Bozeman each missed one practice with illness, but neither was listed on the injury report by the end of the week.

Jackson was hit the hardest by illness. When he arrived at Soldier Field, Jackson was wearing a mask and walked sluggishly to the locker room.

The AFC North-leading Ravens (6-3) can’t afford to slip to the Bears (3-6) because their schedule gets increasingly tougher. After playing Chicago, Baltimore doesn’t have another game against a team with a losing record.

This marks the third time Jackson has missed a game in his four-year career. He sat out the 2019 season finale because Baltimore had already secured the AFC’s No. 1 seed, and he was held out of the Week 12 game in 2020 after testing positive for COVID-19.

Jackson, who had his No. 8 jersey retired at Louisville last weekend, did not practice Wednesday or Thursday because he was sick. Three illnesses this year have led him to miss practice time.

On Friday, Jackson said he thought he got a cold from the weather change.

“I usually don’t get sick, for real,” Jackson said after Friday’s practice. “I used to eat my Flintstone vitamins when I was a kid. My immunity system should be good.”

The Ravens are 1-1 when Jackson has missed a start, beating the Pittsburgh Steelers in 2019 and falling at Pittsburgh in 2020 after the team suffered one of the bigger COVID-19 outbreaks in sports.

Baltimore is coming off a 22-10 loss at the Miami Dolphins, scoring its fewest points with Jackson as its starting quarterback.