Ravens OC Greg Roman: Offense is 'more equipped to win in the playoffs' 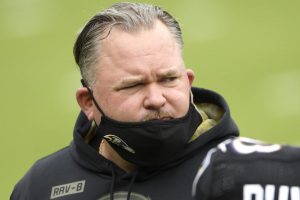 The Baltimore Ravens didn’t break records this year, and the club stumbled a bit more than in 2019, but offensive coordinator Greg Roman believes they’re in a better spot to succeed in the postseason.

The OC said the way the offense is built and the way they’ve overcome adversity multiple times this season has Baltimore “more equipped to win in the playoffs.”

“Our maturity and the experience we’ve accrued has gotten us to this point,” Roman said Wednesday, via the Baltimore Sun. “If we keep working at that trajectory, it will serve us well in the playoffs and these different types of ballgames you encounter in the playoffs.

“Last year, we were able to go out and just boat-race teams quite a bit,” Roman continued. “That’s great, I love that. Those days are fun, I love those postgame locker rooms when that happens. But the reality of it, that doesn’t happen all the time. You might fall behind, you might end up in a tough situation, get a couple whatever kind of calls out there, the ball bounces a funny way. And you’ve got to be able to overcome that and find different ways to find success in a game. So I think those are all very important things.”

Last week’s playoff victory over Tennessee is an excellent example of Roman’s point. The Ravens got down by 10 points early in the first quarter as the offense struggled to move the ball. Then ﻿Lamar Jackson﻿ dashed for a ridiculous 48-yard TD to tie the game, and the Ravens pulled away.

Once again, the Ravens will look to adjust depending on how the Buffalo Bills defend them early in the contest Saturday night.

“Going into a game, especially us, we’ve got to be ready for everything,” Roman said. “Part of this season, especially during the early and mid-part of the season, was seeing how people were playing us, running some things against those things and seeing how it would end up. And gathering information, you’re playing the long game. I think that factors in as well and factors into our evolution.”

Facing a Bills defense that has been gashed on the ground, expect the Ravens to pound the rock early and often Saturday night in what could be a snowy affair, with current forecasts calling for a 70 percent chance of snow.