Home » NFL » Randall Cobb excited to be back in Green Bay after trade from Texans: 'I can breathe again'

Randall Cobb excited to be back in Green Bay after trade from Texans: 'I can breathe again' 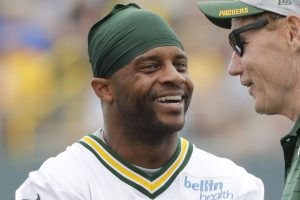 Randall Cobb is home again and couldn’t possibly be happier.

Cobb practiced Thursday as a member of the Packers for the first time since the end of the 2018 season and seemed to be glowing from the combined joy of reuniting with Aaron Rodgers and an apparent relief to have left Houston. He entered the media room in Green Bay with his arms stretched wide, greeting reporters with “My people, I’ve missed you all.”

“I can breathe again,” Cobb said when asked how it feels to be back in Green Bay, via ESPN’s Rob Demovsky. “I’ve seen the other side.”

Cobb spent the last two years of his NFL career as a receiving mercenary, enjoying a productive season in Dallas (55 catches, 828 yards, three touchdowns) before heading to Houston to play with ﻿Deshaun Watson﻿ in 2020. Cobb was part of a trio of receivers that also included Will Fuller and ﻿Kenny Stills﻿, and the veteran played his part, catching 38 passes for 441 yards and three scores.

He was also around for Houston’s dreadful start to the 2020 season, the subsequent firing of coach Bill O’Brien, and the relative disaster that has ensued in Houston since.

Still under contract in Houston until Rodgers pushed the Packers to bring Cobb back to Green Bay via trade this week, Cobb watched as the Texans limped to a 4-12 finish, angered Watson by hiring a general manager (Nick Caserio) without receiving the quarterback’s input (as the team initially indicated they had intended to do), and fought off rumors of internal power plays on the part of VP of football operations Jack Easterby. Cobb also watched Caserio attempt to cobble together a respectable roster made up of one-year veterans similar to Cobb, but with almost no attachment to the Texans other than as a means of earning a living in the NFL.

The mercenary had seen the nature of his employment come to life.

Then, in a flash, Cobb was out of Houston and headed back to Green Bay, home to many fond memories for the veteran wideout.

“One of my teammates said ‘you look like you just got out of prison,'” Cobb said, via the Green Bay Press-Gazette’s Ryan Wood.

Cobb has gone from a team expected to struggle in 2021 to one that many see as a legitimate NFC title contender once again. With his 31st birthday just weeks away, Cobb is precisely where a veteran wants to be: with a team chasing a ring.