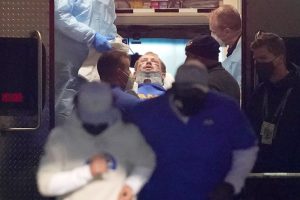 Los Angeles Rams quarterback John Wolford, who got the start Saturday in place of Jared Goff, left Lumen Field in an ambulance during an NFC Wild Card round matchup against the Seattle Seahawks.

Not even 10 minutes into the game and the Rams leading 3-0, Wolford took a first-and-10 snap and dove after a designed quarterback run. Seahawks safety Jamal Adams' shoulder collided with Wolford's helmet as the quarterback went to the ground, and a dazed Wolford stayed down following the play. He was able to walk off the field under his own power but appeared discomforted while walking toward the locker room.

The Rams said he was taken to the hospital for precautionary reasons.

Wolford, who played for the Arizona Hotshots in the Alliance of American Football, had backed up Goff all season until Week 17, when the starter underwent thumb surgery. Wolford led the Rams to a victory over the Arizona Cardinals to clinch a playoff berth.