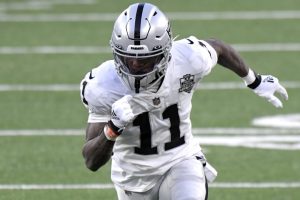 Lauded for his burning speed, ﻿Henry Ruggs III﻿ is no stranger to leaving those trying to keep up with him in the past — or the dust, if you will.

Ruggs isn’t adverse to doing that with his rookie season of a year ago, one in which he really never got going on a consistent basis and his flashes of promise were too few to add up to the production the Las Vegas Raiders had hoped to see after using the No. 12 pick of the 2020 NFL Draft on him.

“Last year is in the past,” Ruggs said Wednesday, via the team website’s Levi Edwards. “Yes, it was frustrating at times, but like I said, that’s in the past. We build on it; it’s a fresh start now, and we’re going to work to make it better.”

The Alabama product’s aim to leave 2020 behind him and work toward a (far) better 2021 is certainly the right approach in theory. While Ruggs doesn’t want to look back, a quick gaze makes it clear how real the struggle truly was.

At season’s end, Ruggs owned a 54.0 Pro Football Focus grade, which was 125th out of 131 qualifying receivers. For the top wideout taken in the 2020 draft, it was a fall from expectation to say the least.

Ruggs’ final rookie tallies were 26 receptions on 43 targets for 452 yards and two touchdowns in 13 games (12 starts).

Seen in the ilk of a Raiders receivers of the past with his ability to stretch the field, Ruggs was a bust as a deep threat and the production he didn’t provide was a boon for ﻿Nelson Agholor﻿. Per PFF, Ruggs had 15 targets of 20 or more yards in 2020, but just five catches for 245 yards and two scores. Agholor had 11 catches for 444 yards and six scores on 23 targets of 20-plus yards, turning those numbers into a lucrative contract with the Patriots.

Thusly, Ruggs is ready to have a larger role in the Raiders offense and, frankly, will need to.

It’s clear Ruggs is facing his lack of production in 2020 head-on and knows improvements must be made.

“I can always develop in all areas,” Ruggs said Wednesday. “Adding strength, adding versatility, moving around, moving to different positions, running different routes, expanding my route tree and doing different things — finding different ways to help the team out. I’m open to all of it, and I’m excited to learn and do new things for the team.”

With a talent such as tight end ﻿Darren Waller﻿, it’s unlikely Ruggs will wrest away the title of being quarterback ﻿Derek Carr﻿’s top option, but becoming a legitimate deep threat and the No. 2 pass-catching option certainly should be in the forecast.

By his account, Ruggs is ready and set to go in his sophomore campaign and looking to leave his disappointing rookie season — along with defenders — behind him.