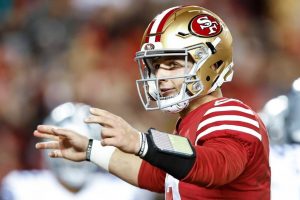 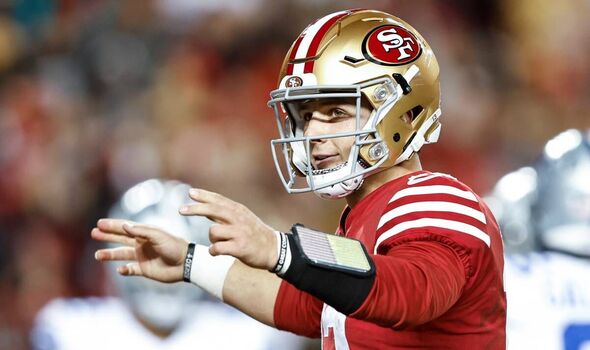 The San Francisco 49ers face the Philadelphia Eagles in the NFC Championship on Sunday, as Jalen Hurts faces off against Brock Purdy. It’s been claimed that Purdy played his worst game in a 49ers jersey last week, but strangely enough that could be good news for the franchise.

Purdy is still defying the odds as a rookie quarterback, with the 49ers star yet to lose a game when starting.

Jimmy Garoppolo stepped back in to his old role when Trey Lance was injured at the start of the season, but when the 49ers star also picked up a potential season-ending injury, many fans feared the worst. But Purdy has since become the talk of the NFL, and could even become the first rookie quarterback to win the Super Bowl.

The 49ers edged the Dallas Cowboys 19-12 in the divisional play-off round, and NFL writer Ben Solak said it was Purdy’s ‘worst game’ since coming in as a starter. But the fact they still won, and he still finished the game with brilliant statistics shows that he could be the real deal.

If that was Purdy at his worst, then the 49ers have really stumbled upon a gold mine with their rookie star. Purdy was ‘Mr Irrelevant’ in the 2022 NFL draft, being picked dead last out of the entire pool.

But he’s achieved more than most this season, even if he was given a slice of luck due to injuries in his position. But just like Tom Brady did back in 2001, you have to take those chances when they come your way.

Purdy has certainly done that, and it seems as though the haters that were expecting him to fail have now backed off seeing as he’s led the 49ers to the Championship round. Purdy is still undefeated, and many expected that the play-offs would finally be the breaking point for the 23-year-old.

However, the 49ers scored the most points on Wild Card Weekend, and held off a talented Cowboys side too at Levi’s Stadium. “It’s not bad news that Brock Purdy just played his worst game for the 49ers, it’s good news,” said Solak on the Ringer NFL Show.

“Why? Because they won! It wasn’t pretty, it wasn’t the cleanest game they’ve played, they may have lacked the style points. But you don’t advance in the play-offs on style, you advance on win/loss, and they won.

“…I think this theory that Purdy’s going to fall apart, I just don’t see it happening now.” Purdy really can’t lose this season, he can only win at this stage, and he’s done so well that the 49ers have a serious decision to make at quarterback moving forward.