Home » NFL » Predicting the 2021 starting QB for all 32 NFL teams, from the locks to the wild cards

Predicting the 2021 starting QB for all 32 NFL teams, from the locks to the wild cards 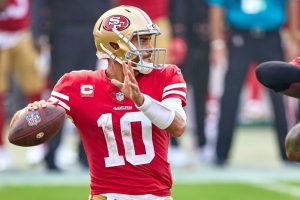 Field Yates has previous experience interning with the New England Patriots on both their coaching and scouting staffs. A graduate of Wesleyan University (CT), he is a regular contributor to ESPN Boston’s Patriots coverage and ESPN Insider.

When the incomparable Adam Schefter makes a prediction, everyone takes notice. After all, he’s the most plugged-in man in football and wouldn’t suggest something haphazardly. So when Schefter forecast last month that as many as 18 NFL teams could have new starting quarterbacks in 2021, I wanted to dig deeper into the 2021 quarterback landscape.

Even as we’re a month out from the start of the new league year on March 17, we’ve already seen quarterback movement and have speculated endlessly on others. Matthew Stafford and Jared Goff swapped jobs in a blockbuster trade. Dak Prescott and Cam Newton are free agents. Deshaun Watson wants out of Houston.

Let’s turn that speculation into a prediction and forecast each NFL team’s starting quarterback for 2021, breaking them down into returning starters and new ones.

These are in order from the locks at the top to the teams I’m less sure about at the bottom.