Can the NFC East leaders get to .500 for the year and pad their lead in the division?

That's what the Philadelphia Eagles will try to do on Sunday as they take on the New York Giants. After going just 1-4-1 to start the year, the Eagles are riding a two-game that began with a 22-21 victory over the Giants two weeks ago. In that contest, the Eagles had to rally for two touchdowns in the final five minutes to erase an 11-point deficit. Carson Wentz's 18-yard connection to Boston Scott with 40 seconds remaining proved to be the game winner.

The Giants are looking to stay alive in the division after moving to 2-7 on the year by sweeping Washington. 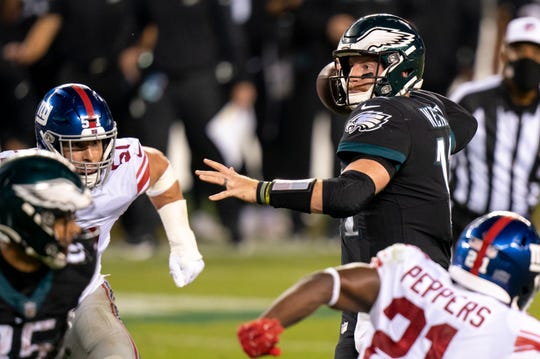 What time does Eagles vs. Giants start?

What TV channel is Eagles vs. Giants on?

How can I watch Eagles vs. Giants online via live stream?

What are the odds for Eagles vs. Giants?

Where can I find score updates for Eagles vs. Giants?

Gannett may earn revenue from audience referrals to betting services. Newsrooms are independent of this relationship and there is no influence on news coverage.