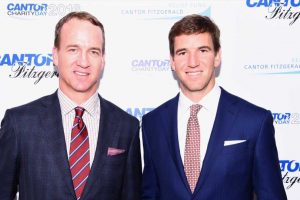 The Manning brothers are returning to the gridiron — just in a different way.

Their programming will begin on ESPN’s “Monday Night Football MegaCast” on Sept. 13 with the Las Vegas Raiders and Baltimore Ravens contest, which features a traditional ESPN and ABC broadcast; the Manning brothers on ESPN2; a “Between the Lines” programming on ESPN+; and a Spanish language presentation on ESPN Deportes.

“Offering multiple Monday Night Football viewing options for the next three seasons continues our innovation efforts and provides additional value for our fans,” said Jimmy Pitaro, Chairman of ESPN and Sports Content. “Peyton and Eli will bring a different approach, delving into conversation about broader, big-picture topics while also honing in on the game, much like fans do when watching with their family and friends.”

Why Peyton and Eli Manning are on ‘Monday Night Football’

On July 19, 2021, ESPN announced Peyton and Eli Manning would be joining Monday Night Football for commentary, a development that has been sought after since Peyton Manning retired in 2015.

Since July of 2019, Peyton Manning has hosted Peyton’s Places, a show that revisits iconic moments in NFL history with former players, coaches and other key figures about football and culture, and “Detail,” in which he has broken down current NFL quarterbacks since late 2018,” on ESPN+. However, he declined to host Monday Night Football for multiple years, including reported reasons related to travel, potentially criticizing Eli Manning during his playing career and his perspective that he could be an NFL owner or front office leader.

Now that Eli Manning has retired and Peyton Manning has been involved in broadcasting for multiple years, the partnership seemed more likely to occur.

“This partnership with ESPN and The Walt Disney Company reflects an ongoing, shared commitment to offering fans fun, innovative content,” Peyton Manning said in a press release. “ESPN+ has been a terrific partner for Omaha Productions [Manning’s production company] as we built out The Places franchise and we’re excited to co-create a new MegaCast format that will have something for everyone.”

Peyton and Eli Manning each said in an interview with Fox Sports 1’s Colin Cowherd they would be breaking down moments all over the field in their commentary.

How to watch Manning brothers MegaCast

“Monday Night Football with Peyton and Eli” will simulcast on ESPN+ and be televised on ESPN2. According to Pro Football Talk, Peyton and Eli Manning will be the only hosts of their commentary, with each former player broadcasting from a remote location.

Viewers can watch “Monday Night Football with Peyton and Eli” via ESPN2 on their respective cable service of fuboTV, which offers a seven-day free trial. ESPN+ has several subscription options, which can be viewed below.

ESPN has been the home of “Monday Night Football” since 2006, and for the first time in a while the network will be keeping its broadcast team together. Steve Levy, Louis Riddick and Brian Griese will enter their second year as the MNF broadcasters as part of a three-man booth. “Monday Night Football” games can be streamed via the ESPN app or through fuboTV, which offers a seven-day free trial.

“Monday Night Football” games featuring the Manning brothers are denoted with an asterisk. The MegaCast will be available for 10 games total during the 2021 season.