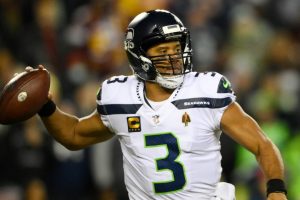 These are trying times for the Seattle Seahawks and their franchise quarterback.

As their offense continued to sputter, the ‘Hawks continued to lose on Monday night, falling to the host Washington Football Team, 17-15.

Roughly 90 minutes after Russell Wilson and the Seahawks’ beleaguered offensive bunch had one last gasp at an improbable comeback fall short, the seven-time Pro Bowler finally addressed the media. Wilson’s reddened eyes colored the emotion of the star signal-caller suffering through his worst season.

“It’s challenging right now, but, at the same time, I know what we’re capable of. What we’re capable of has to show up. We have to make that happen,” said Wilson, who threw his first two touchdowns in the last three games. “I don’t know any other way. I’m not one of those guys to be down and out and not believe and give up; give up and give in. I’m gonna keep working my butt off every day. This team is, too. That’s what we’re gonna make sure of.”

While the optimism and effort might not be lacking, the results are.

The Seahawks have scored just 28 points combined over the last three games since Wilson returned from finger surgery. Problems are aplenty for the Seahawks offense, but for the first time in a decade, Wilson’s play might be at the top of the list.

Having missed the first three games of his career when he had to undergo finger surgery earlier this season, Wilson has looked anything but himself in his return. He wasn’t consistently playing at the elite level accustomed him before the injury, but since his return he’s struggled to make things happen for the Seahawks.

“Film doesn’t lie. We’re missing some stuff. I don’t see indications of that in practice,” Carroll said of Wilson’s play. “I don’t know what to make of it other than the fact that we gotta keep battling, keep trying to figure it out. I thought we had some guys open tonight, with some chances, and unfortunately we didn’t hook it up.”

The Seahawks fell to 3-8 on the season and lost their third game in a row with nary 267 yards of offense (96 coming on their final drive) to show for their troubles.

After Monday’s defeat, the Seahawks are the No. 15 seed in the NFC, ahead of only the winless Detroit Lions. Seattle hasn’t missed the playoffs since 2017, but it seems all but mathematical that it will miss the postseason. Seattle hasn’t had a losing season since 2011, a season prior to Wilson’s rookie year, but that seems a likelihood, as well.

At game’s end, Wilson’s statistics told a somewhat inaccurate tale of success. He completed 20 of 31 passes for 241 yards, two touchdowns, no interceptions and a 110.6 rating and was also the team-high rusher with 16 yards on a pair of carries.

It was a rough night for the offense overall, but Wilson repeatedly missed open targets — often times by a large margin. His ability to read the field didn’t look near what it once was. His trademark beautiful deep ball looked rather unpleasant quite a few times. He was 4 of 9 for 139 yards and a touchdown on passes of 10-plus air yards, per Next Gen Stats. The bulk of those yards came on a 55-yard toss to a wide-open Tyler Lockett that Lockett had to wait for. The 6-yard laser into a tight window he threw to Gerald Everett for a touchdown three plays later might well have been the best pass he’s thrown since he returned to the team in Week 10, but it was hardly emblematic of his evening.

“Today, I missed a couple,” said Wilson, who’s lost three consecutive starts for the first time in his career. “There’s one that I threw really high, because I was getting knocked back, I threw high. I think earlier on, just adjust my eyes a little bit. It wasn’t like I didn’t feel confident with it.

“I know that sometimes you shoot it and it doesn’t go in. I’m gonna keep shooting.”

Late in the ballgame, Washington was just about to sew up the win as it led 17-8 and was driving for a score. Then suddenly life was breathed into a last hope for the Seahawks.

First, Washington running back Antonio Gibson couldn’t stay in bounds and precious time on the clock was saved for the Seahawks.

Then Logan Thomas’ win-sealing touchdown was overturned and Seattle took over down by eight points with more than two minutes to go.

And for 10 plays and 96 yards (or more accurately nine plays as Wilson took a horrible sack outside of the pocket), Wilson looked like the Wilson of old with magic in his arm and something special always in reserve.

He found Freddie Swain deep over the middle for a 32-yard score to cut the Seahawks’ deficit to the final score. Alas, the struggles continued for the Seahawks with Wilson’s two-point pass to Swain intercepted by Kendall Fuller.

There was a glimpse of glory before the reality of another defeat.

These are trying times for the Seahawks and their franchise QB, indeed.

“We’re in a storm, you know, and I believe that we have to keep going,” Wilson said. “The only way to get to the other side is just believing that the waters are going to calm down a little bit and we’ll be able to get through it. I think that this season has been a tough journey so far just in general. We’ve had some crazy tough games and battled , battled, battled. The last few minutes of the game showed we have the right character of guys – that’s what’s special about this team. Just to believe that something great is going to happen when we’re down by eight.”