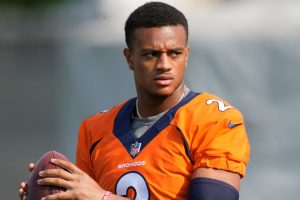 The Denver Broncos may have been sucked into overthinking the decline of Justin Fields’ draft stock, nevertheless in doing so acquired a certified stud for their troubles in Patrick Surtain II.

Drafting good football players is wise and savvy and smart and rather self-explanatory. But as history tells us the draft can so often lure teams into contagious group-think and the mistake of over-scrutinising; and while the Broncos might later rue their decision to pass on Ohio State’s unjustly-doubted quarterback, pulling the trigger on Alabama’s prized cornerback with the ninth overall pick offered little room for protest.

Those that endorse Surtain allude to a ‘gets it’ guy. The kind anybody watching football for the first time would believe had been patrolling an NFL secondary for years. ‘Gets’ football, ‘gets’ leadership, ‘gets’ hard work, ‘gets’ the attention to detail required at the top.

Surtain grew up with a former All-Pro and three-time Pro Bowler for a father before picking the mind of Nick Saban in Tuscaloosa; there is a transparency to the elite guidance and expertise that have moulded the 21-year-old into a destined star at his position.

Preseason is preseason, a minefield for snap judgements that fade into nothingness and ‘checks depth chart’ names that appear once only to never be seen again. And then there are the ‘yep’ moments.

Surtain logged his own ‘yep’ moment in Denver’s preseason opener against the Minnesota Vikings, raising the curtain on his pro-ready faculties by sniffing out a debut pick six.

Hunting a third-and-four at the Vikings 23, Surtain read the eyes of quarterback Jake Browning before out-working Ihmir Smith-Marsette to pick-pocket the wide receiver’s comeback route and return a 30-yard interception for a touchdown. The back-peddle was expertly controlled and scarily premeditated, the square shoulders stayed true in form for the entirety of the play, the timing and acceleration to his back-foot push-off was faultless and the shut-down speed exquisite.

“Don’t throw it over there,” rejoiced Courtland Sutton on the sideline.

Alabama’s rivals targeted Surtain just 48 times during the team’s National Championship-winning 2020 season. NFL quarterbacks will soon learn to follow suit when it comes to swerving Surtain’s side of the field. Surtain’s time at college entailed lining up against some of the most talented playmakers the nation had to offer, from Florida’s Kyle Pitts to Ohio State’s Chris Olave/Garrett Wilson tandem, while LSU’s star-studded National Championship-winning side including Joe Burrow, Ja’Marr Chase, Justin Jefferson and Terrace Marshall purposely avoided him for the majority of their 2019 matchup.

His maiden interception for the Broncos shared similarities to the pick six he recorded against Mississippi State in his final year at college, Surtain affording himself just the right amount of leverage and keeping his eyes on the quarterback while gliding sideways in keeping with receiver Cameron Gardner before pouncing on the curl route and muscling in for the takeaway. Again: precision, instincts, speed, technique, aplomb.

Every inch of his 6ft 2 frame was on display against Michigan back in 2019 when he somehow managed to bat a potential touchdown pass out the grasp of Mike Sainristil inside the five-yard line while simultaneously twisting his hips, keeping his eyes fixated on the flight of the ball and remaining stride for stride with the receiver.

Similarities in pre-draft testing to Los Angeles Rams corner Jalen Ramsey are supported by the tape heading into the NFL. From both a physical and mental standpoint, he has it all.

“He’s just a do-it-all type of guy,” Broncos safety Justin Simmons said of Surtain earlier this offseason. “He gets football and he understands it. He gets conceptually what we’re doing on defense. It’s awesome watching him play.”

Patrick Surtain II wasn’t having it 🔒😤

The man Denver drafted instead of a quarterback didn’t waste time introducing himself to the man Denver kept their faith in at quarterback, Surtain having been responsible for Drew Lock’s first turnover at training camp.

Head coach Vic Fangio has meanwhile found himself blessed with the luxury of being able to shift his shiny new toy into multiple defensive back roles, Surtain’s presence in an already well-equipped secondary giving the Broncos not only the freedom to increase their use of six-DB sets but also the security over the top that will allow for more four and five-man rushes.

“It’s rare. It’s rare that you would ask a rookie to do that, No. 1, and it’s rare that he’s been able to handle it and do it,” said Fangio. “Now, he’s not perfected any of them yet, by any means, but we think he can, and it’s not too big for him.”

The Broncos’ win over the Miami Dolphins last season, during which they came away with six sacks, was about as good an insight into what a Fangio defense offers as you would wish for, with simulated Cover 2 and five-man rush looks combining with nickel packages in costing Tua Tagovailoa valuable milliseconds spent trying to decipher the carnage in front of him. And that was without Von Miller.

Surtain’s versatility and football IQ looks a perfect match for that alongside the likes of Simmons, Kareem Jackson and Kyle Fuller. It might be premature to suggest Surtain’s introduction could see this unit rival Denver’s ‘No Fly Zone’ defense of 2015, but the potential is there to be among the most gifted and productive secondaries in the NFL.

The mid-route aggression and physicality of a Jaycee Horn may not be as evident to Surtain’s game, but he is such a smooth operator that it doesn’t really need to be. Rarely does he overcommit or overextend himself, while the blend of length, vertical spring, decisive calculation, get-off speed and conviction at the point of attack makes him a match for any receiver in the league.

“You’ve seen the guys say he’s picking up things like he’s a vet,” said Broncos linebacker Bradley Chubb. “I see nothing different. He’s carrying himself with a confidence and a swag.”

George Paton, coach Fangio and the Broncos got themselves a good one. Draft good football players.