Home » NFL » Patrick Mahomes' next challenge in Kansas City: Learning to do more with less

Patrick Mahomes' next challenge in Kansas City: Learning to do more with less 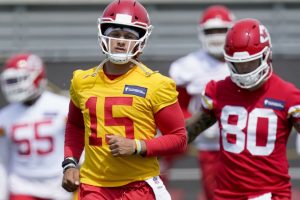 It’s always hard to determine where Kansas City Chiefs quarterback Patrick Mahomes can improve if you’re not watching him up close and personal every day. All those jaw-dropping throws and crazy improvisational feats often leave the impression that the man can do no wrong on a football field. Mahomes literally has altered the possibilities of what a quarterback can be. Now he has a chance to show us the next logical step in his development.

There’s been a lot of chatter about how the Chiefs’ offense will evolve as it tries to find more reliable options to complement wide receiver Tyreek Hill and tight end Travis Kelce﻿, K.C.’s pair of first-team All-Pro pass catchers. The more meaningful question should revolve around how Mahomes is going to operate this offense, with more unknowns surrounding him than ever before. There are plenty of quarterbacks in this league who need ample help to have a chance at succeeding. The best at that position — and Mahomes currently sits atop that list — excel at making the players around them look better than they actually are.

After spending his first three seasons as a starter wheeling and dealing in an offense flush with high-profile weapons, Mahomes has spent this offseason learning how to get the most out of less accomplished talents.

“I think a lot of guys had a really good OTAs and a really good minicamp,” Mahomes said on Thursday, the final day of his team’s mandatory minicamp. “Mecole (Hardman), D-Rob (﻿Demarcus Robinson﻿), Tyreek (Hill), Gehrig (Dieter), (Marcus) Kemp, really a lot of these guys went out there and competed and did a great job. The young guys are coming in with (Antonio) Callaway and (Cornell) Powell and they’re learning how we practice and how we really get after it. I feel like we have a good group of guys with guys like Byron Pringle, and all these guys are practicing super hard. They’re making plays at practice every single day, and I have the ultimate trust in them that no matter who’s in the game, we’re going to make some plays happen.”

It’s important to note here that Mahomes is an eternal optimist. He believes he can win regardless of what’s surrounding him, and that perpetual faith surges throughout the entire Chiefs roster. The problem is that he’s never gone into a season with more questions about his receiving corps. He’s about to learn about one of the predictable challenges that can come with being a superstar quarterback.

Ask Aaron Rodgers (who’s had Davante Adams in Green Bay), Drew Brees (who relied heavily on Michael Thomas prior to his retirement in New Orleans) or Tom Brady (who won with plenty of no-name receivers in New England before joining a loaded Tampa Bay roster last year). Mahomes, who signed a massive extension last summer, is entering the point in his career where his price tag will inflate dramatically. Though Over The Cap lists his cap number for 2021 at $7.4 million after his contract was restructured, Mahomes is scheduled to count for $35.8 million against the cap in 2022, and the figure only grows from there. The more money the quarterback makes, the more critical it becomes for teams to develop weapons instead of shopping for them. Most great quarterbacks only have one or two high-caliber pass catchers to rely upon. Mahomes has spent the first three years of his starting career playing with three, thanks to the presence in that span of Sammy Watkins, who left in free agency this offseason.

The Chiefs have been quite open about the bad taste still lingering from their 31-9 loss to Tampa Bay in Super Bowl LV. As much as people point to Kansas City’s offensive line injuries in that contest, what also couldn’t be overlooked were the limitations at receiver that night. Every other receiver not named Hill or Kelce, many of whom Mahomes listed in that earlier quote, did nothing of note in that game. When Mahomes needed to make a play, he couldn’t depend on anybody other than his stars.

In retrospect, that contest was a potential glimpse into the future for Mahomes and the Chiefs. It showed what life could be like with a porous offensive line and only a couple of receivers who could be difference-makers. The Chiefs used this offseason to invest heavily in the line, trading for Orlando Brown﻿, signing Joe Thuney, Austin Blythe and Kyle Long and drafting Creed Humphrey to ensure Mahomes is never without adequate protection this fall. What they couldn’t do was a find a way to lure another wide receiver to Kansas City to provide the kind of threat Watkins offered on those days when he actually was healthy.

JuJu Smith-Schuster decided he’d rather stay in Pittsburgh for another season than sign with the Chiefs as a free agent. T.Y. Hilton made a similar decision (by staying with the Colts), while Josh Reynolds chose the Tennessee Titans over a spot in a more pass-happy system like Kansas City’s. Those moves left the Chiefs in a situation where they have to lean on certain receivers like they never have before. It also means Mahomes will have to distribute the ball more judiciously than he did this past year. It’s quite likely that you’ll see more targets for running backs like Clyde Edwards-Helaire﻿, Darrel Williams and Jerick McKinnon﻿.

“We’re always implementing new stuff, adding new stuff to the offense, trying out different things here and there,” Mahomes said. “We have these running backs that can catch the ball so well out of the backfield, so why not utilize them? Clyde, Jerick, Darrel, Darwin (Thompson), all these guys, they’re really good at running and catching the ball, running routes and getting into space. So using them as well as using tight ends and using the receivers that are obviously so special. I think you’ll see a wide variety of stuff [that we’ll] come into the season with, and that’s what you want to be with a good offense.”

It’s crucial for Mahomes to spread the football around even more, because defenses are going to keep focusing on Kelce and Hill. The Chiefs selected Edwards-Helaire in the first round of the 2020 draft because they believed he could bolster their passing game from the backfield. They’re also hoping Hardman can grow into a more dependable target, as he went from being a Pro Bowl kick returner as a rookie to an underwhelming performer in his second year. Robinson and Pringle have experience in the Chiefs’ offense, but the most they’ve shown are flashes of potential.

The Chiefs knew this day was coming eventually. They overspent on an injury-prone receiver like Watkins three years ago because they wanted Mahomes to start his career with as much success as possible. Mission accomplished on that front. Now they have a quarterback who’s already destined for the Hall of Fame and showing more subtle growth with each passing year. The players who see Mahomes every day in practice say he’s displaying more patience in his game.

“He hasn’t been trying to do it all,” said safety Tyrann Mathieu when asked about how Mahomes has looked during the offseason workouts. “He’s been taking what the defense gives him. He’s understanding different coverages. Even when I’m moving around back there, he’s getting a good idea and feel for what I’m doing. If you can figure that out, you can figure out what we’re doing as a defense. You can tell his eyes are right, his mind is right and if we can protect him like we can, he’s going to be the guy we need him to be.”

There really should never be a question about Mahomes giving the Chiefs what they need. It’s already guaranteed that he’s going to generate about 4,500 yards and 40 touchdowns every year, as long as he’s healthy. He’s just that good, and the Chiefs are that dependent on him producing at that clip. He’s always going to be in the conversation for league MVP.

The more intriguing challenge for him is the one that will come this fall. The Chiefs can no longer overstock the shelves with high-profile weapons, and they know how defenses will attack their star receivers. That means Mahomes will have to make magic happen in ways we’ve never seen thus far. He’ll basically have to do it with the knowledge that it will no longer be as easy as it once was.