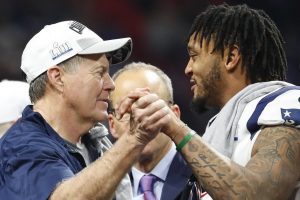 Longtime New England Patriots safety ﻿Patrick Chung﻿ retired back in March after sitting out the 2020 season. After spending 10 years with Bill Belichick, Chung said recently that the hardest part of retiring might have been letting his coach know he wasn’t returning.

“I just went and talked to Bill. That was probably the hardest conversation I’ve had in a while. I respect him. He respects me. It’s more than player to coach with me and Bill,” Chung said, per ESPN’s Mike Reiss. “I felt like I was letting him down, but it was something I had to do for my family and me.”

A second-round pick by Belichick in 2009, Chung spent all but one of his 11 years with the Patriots — a woebegone season in Philly in 2013. The hard-hitting safety won three Super Bowls with the Patriots as a key chess piece in the secondary.

Along with several Patriots players, Chung opted out of the 2020 season due to COVID-19 concerns. Chung said, after missing the season, he woke up one spring morning and realized he was done with his NFL career.

Part-owner of the New England Free Jacks of Major League Rugby, Chung will remain a fan of his former team. The 33-year-old said he was honored that second-year safety ﻿Kyle Dugger﻿ called to ask if he could wear Chung’s No. 23.

“That’s huge respect. A lot of people don’t have to ask: If it’s open, take it. For him to call and ask, when he didn’t have to, I appreciated that,” Chung said.

“He asked me for the number and I said, ‘Yes, absolutely.’ I told him to take it over. I pray to God he’s way better than I am, because that’s only going to help us as Patriots. Hopefully, he gets to that point. I hope he can. He’s young, he’s raw, he has the instincts, has all the intangibles, so I’m praying for that.”

If Dugger grows into the type of safety Chung was for the Patriots during his prime, Belichick will consider that a win.