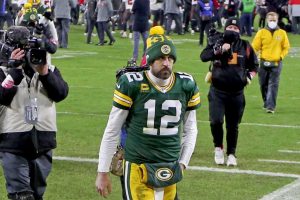 Murphy was speaking at an event at Lambeau Field on Thursday and referenced previous conversations with former general manager Ted Thompson (2005-17), who died in January. He said Thompson was the one who acknowledged Rodgers' complexity.

"I'm often reminded though … of Ted Thompson, as most of you know, just a great general manager, passed away (earlier this year)," Murphy said, according to NBC 26 in Green Bay. "(Thompson) often talked about Aaron, that he's a … and it wasn't just Aaron, a lot of different players. He would say, 'He's a complicated fella.' So, I'll just say that."

Rodgers, the reigning NFL MVP, is unhappy and wants to leave the Packers, according to multiple reports, with one report saying he will not return if general manager Brian Gutekunst remains in charge.  The relationship fractured when the Packers selected quarterback Jordan Love in the first round of the 2020 draft – shortly before Rodgers' eventual MVP campaign.

Earlier in the week, Murphy had described the scenario with Rodgers as a divisive topic for Packers fans.