That theme is often hammered home when it comes to general elections in our democracy. Boy, did that principle really play out for NFL players who narrowly ratified an 11-year extension of their labor pact with NFL owners. The final tally: Yays, 1,019. Nays, 959.

For all of the consternation and deep divisions revealed in the days before and during the online election that closed on Saturday night, there were apparently no charges of voter fraud when the NFL Players Association (NFLPA) revealed the outcome on Sunday morning. No hanging chads. No suppressed ballots.

Just some grumbling about players who didn’t vote and a razor-thin margin that underscores a polarization not unlike the political climate that exists in our nation at large. So there. Sports reflecting society at large, again. 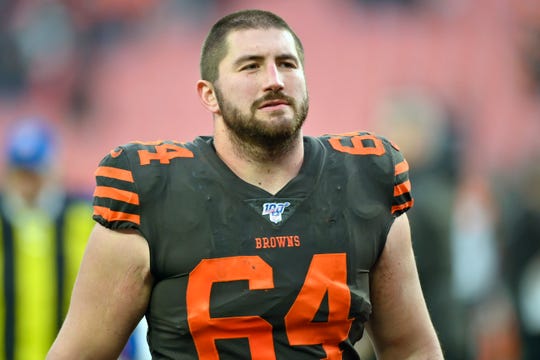 Browns center JC Tretter has his work cut out for him as the new NFLPA president in trying to unify the players after their close CBA vote. (Photo: David Richard, AP)

Here’s to a key challenge facing JC Tretter, the Cleveland Browns center elected last week to succeed Eric Winston as the NFLPA’s president: Unifying the players, with so much opposition to the collective bargaining agreement and expanded season to 17 games (in 2021), among other objections, is the not-so-sudden Herculean task that Tretter undoubtedly realizes he assumes.

Just think: The labor deal that NFL players just ratified wasn’t even fully endorsed by the NFLPA’s executive committee as it put the CBA up for a vote.

“We understand and know that players have been split on this deal, including members of our EC,” Tretter said in a statement. “Going forward, it is our duty to lead, however we may feel as individuals, to bring our men together and to continue to represent the interests of our entire leadership.”

The coming months will be so interesting, as damage from the process – including criticisms of NFLPA executive director DeMaurice Smith – is assessed. Soon, the high-profile players who are unhappy with the deal will be working side-by-side with the rank-and-file players who surely pushed the deal through.

Deal with it. The CBA is done now. And it sure seems like more of a win for the players than it did two weeks ago, before the stock market tanked magnificently amid the coronavirus crisis.

Even some NFL owners who wanted another round of long-term labor peace as a pillar needed to secure fatter revenues from the upcoming negotiations with network TV partners were having second thoughts about approving the deal that was extended to players.

As one person connected to NFL owners told USA TODAY Sports last week on the condition of anonymity, while awaiting the results of the vote: “Every time the market goes down 1,000 points, an owner says, ‘Can I have my vote back?’ “

The person requested anonymity because of the sensitivity of voting.

In this case, though, a large majority of NFL players bucked at least one pattern that existed in the last Presidential Election by hanging onto their votes.

For the most part, they voted. Although Baltimore Ravens cornerback Marlon Humphrey maintained that “around 500 players” didn’t cast ballots, nearly 2,000 players voted. That’s at least more than 80%  of the dues-paying NFLPA membership.

With a swing margin of a mere 60 votes, those 500 players could have certainly made a difference. But hey, if there was no coronavirus crisis – which seemingly swung the merits of the deal, at least in the short run, as economic and social circumstances resonated – it’s unclear, too, whether the measure would have passed. Of course, we’ll see how the merits plays out in the long run as the NFLPA again took an 11-year deal that doesn’t include an opt-out clause.

The participation (or potential for lack thereof) was one of the X-factors that was difficult predict for the labor vote, especially when considering the apathy toward union business that players – especially younger ones, just trying to maintain a roster spot – often exhibit.

Yet with 1,978 ballots cast, that’s a significant amount of players who allowed their voices to be heard. And the purported 500 who didn’t vote? Keep your complaints to yourself.

The voices of dissension won’t be silenced quickly. Just because the deal was ratified doesn’t mean the concerns of those who opposed the deal have vanished. A 17-game season is coming. There are still franchise-tag restrictions and the fifth-year options that can prevent a first-round pick from hitting the market for eight years. Disability benefits have been reduced. Holdouts can no longer have their fines rescinded when they come back.

Even so, it was striking to see the Sunday morning tweet from Patriots icon Tom Brady, a rare high-profile (and highly paid) member showing support for the much-maligned Smith. In responding to the open letter that Smith posted on his verified Twitter account, Brady responded: “Well done De.”

I’m not expecting other high-profile players (or their agents) will be lining up to echo that sentiment. The labor pact was in many ways a referendum on Smith’s leadership, and the narrow margin clearly shows the work that must be done for rebuilding the credibility and trust among the NFLPA leadership.

Tretter, prepped by the School of Industrial Labor Relations at Cornell, might be just the man capable of connecting with the broad range of constituents within the NFLPA. That he was elected president by the 32 team player representatives represents quite the mandate amid the bickering over the merits of the labor pact.

“The democratic process as played itself out,” Jenkins tweeted on Sunday. “We must be committed to unifying our current and former members. While I don’t agree with the decision because of its negative impact on some current and former players, I do respect our process and will push forward accordingly.”

Love the deal or loathe it, that’s what’s next for NFL players.