Home » NFL » Opinion: Miami Dolphins get what they deserve — a reality check — with NFL Playoffs on the line

Opinion: Miami Dolphins get what they deserve — a reality check — with NFL Playoffs on the line 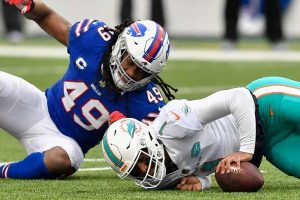 Win and you’re in.

Sounds simple enough, for sure. But so much easier said than done.

The Miami Dolphins experienced it the hard way on Sunday, enduring the worst and most lopsided loss of an otherwise impressive season when it mattered the most. The Bills drubbed Miami, 56-26, in Orchard Park, N.Y., leaving the Dolphins (10-6) with a reality check that underscored what it will take to advance to a playoff level.

Baltimore’s in. The increasingly dangerous Ravens (11-5) pounded the Bengals for their fifth win in a row.

Cleveland’s in. Finally. The Browns (11-5) have snapped the NFL’s longest playoff drought, qualifying for the first time since 2002. It took a nail-biting finish, but Cleveland squeaked by with a two-point win against the Steelers that came down to preventing a two-point conversion and then running out the clock with a Baker Mayfield sprint around right end.

There’s some athletic justice to getting into the playoffs when controlling your destiny. As the final Sunday of the NFL’s most bizarre regular-season yet continued, the Colts, Cardinals, Rams and the Washington Football Team would also meet their own win-and-you’re-in challenges.

The Dolphins, though, were left with no one to blame but themselves.

No question, they could have used some FitzMagic again. There’s no guarantee that Ryan Fitzpatrick would have fared much better than rookie Tua Tagovailoa against the hungry, playoff-ready Bills, who as freshly minted AFC East champs are eager to prove they are capable of bigger titles. Yet eight days after Fitzpatrick saved the day by coming off the bench to spark the improbable win at Las Vegas, he was a Week 17 scratch after being placed on the COVID-19 list.

What an unfortunate sign of the times. COVID-19 chalked up another win against the NFL because Fitzpatrick’s absence (coinciding with the Saints losing their Week 16 hero, Alvin Kamara, under similar circumstances) severely crimped whatever strategy Dolphins coach Brian Flores might have tapped while in dire straits.

Maybe it would not have mattered. But it would not have hurt. Perhaps Fitzpatrick, the savvy, 16th-year vet, would have been summoned right after Isaiah McKenzie’s 84-yard punt return touchdown made it 21-3. Or maybe Flores would have made the switch at halftime, trailing 28-6. Or after the first of Tagovailoa’s three interceptions, midway through the third quarter, which John Norman returned 16 yards to turn it into a pick-six that made it 35-13.

Tagovailoa was incapable of putting the team on his shoulders and pushing it into the playoffs on this day. The promise remains for that day to come. Yet it turns out that at the moment it was too much to ask of the rookie. While playing catch-up all afternoon, Tagovailoa threw 58 passes, completing 35 for 361 yards with a garbage-time touchdown, three picks and a 62.5 efficiency rating. But this was not a case where Tagovailoa failed his team miserably. Instead, his team failed him worse as the Dolphins wound up way off-script from the formula that allowed them to get into the position of being one win away from the playoffs.

Where was the support for the rookie? Miami’s defense started with some hope, intercepting Josh Allen on the opening drive. Then it was shredded unmercifully. The running game averaged just 3.5 yards a carry. Receivers dropped several passes. The special teams gave up a touchdown. Tagovailoa was under immense pressure, facing defensive looks that he will certainly read better in time. But truth is, even Tom Brady would have had a tough time winning with the conditions that enveloped Tagovailoa on Sunday.

It adds up to a full volume of hard-knock lessons for Tagovailoa — and his team. Despite Sunday, the Dolphins are headed in the right direction with Flores, a rising star finishing up his second season at the helm. Remember, they started 0-7 in 2019. Since then, they are 15-10. They should be better next year, should be back in contention for the playoffs. But the hard loss needs to stick with them, too, as a reminder of the level it will truly take to be a playoff team.

As for Tagovailoa, drafted fifth overall last spring while recovering from the hip injury that ended his college career, it’s apparent he must improve as a downfield passer. That was evident in Week 16, when Fitzpatrick came into the game and attacked the Raiders with the deep passing game. And it was evident on Sunday as Miami tried to roll with short hitch passes and screens to generate a passing game — until it was too late as the game got out of hand. It says something that Miami’s longest passing play, 32 yards, came from a wide receiver, Lynn Bowden Jr., rather than Tagovailoa. Bowden connected with Myles Gaskin on a sweet throwback double-pass that put Miami in striking range. But the next creative wrinkle, a jet sweep to Bowden inside the 10-yard line, backfired. Miami lost seven yards and settled for a field goal in a game where Buffalo settled for touchdowns.

Then again, the Dolphins still had a sliver of a playoff hope as they left Bills Stadium. They could back into the playoffs with a Colts loss.

Yet that hope all but fizzled by halftime in Indianapolis as the Colts — with their own win-and-they’re-in scenario after starting the day needing help — rolled to a 20-0 lead on the Jaguars (though they cut it to 20-14 early in the fourth quarter).

A Colts win would be fitting enough. The Dolphins had their chance, and hardly resembled a playoff team. In the end, they got what they deserved from the results — the reality that they were one big win shy of making the playoffs.

Win and you’re in? The flip side is just as revealing. Lose and you’re out.