Home » NFL » Opinion: Here’s what will determine whether Urban Meyer will succeed as Jaguars coach

Opinion: Here’s what will determine whether Urban Meyer will succeed as Jaguars coach 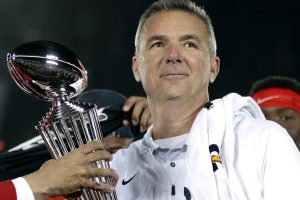 Let Jimmy Johnson tell us what Urban Meyer is up against now that the three-time college championship coach is leaping to the NFL to coach the the Jacksonville Jaguars.

“The opportunity is there,” Johnson told USA TODAY Sports. “Urban is a smart, very organized, good football coach. They’ve got plenty of draft picks, plenty of cap room. But you’ve got to pick the right players. And you’ve got to get some great coaching.”

For my money,  no one is more qualified than Johnson to assess whether Meyer — who won a pair of national titles at Florida and another at Ohio State — can succeed in the NFL. Johnson in 1989 took the leap as a championship coach at the University of Miami (Fla.) to revive the downtrodden Dallas Cowboys. Dallas won back-to-back Super Bowls under Johnson, then claimed a third title under Barry Switzer with a team built by Johnson, elected last year to the Pro Football Hall of Fame.

Urban Meyer as Ohio State coach holds the trophy after the team's 28-23 win over Washington in the Rose Bowl after the 2018 season. (Photo: Jae C. Hong, AP)

Johnson knows the allure for Meyer, 56, who can use the No. 1 pick in the NFL draft to build the Jaguars around Clemson quarterback Trevor Lawrence.

He also knows the pitfalls.

For every case like Johnson’s of a coach trying to succeed in the NFL after making his mark on the college level, there are multiple flops. Think Chip Kelly, Dennis Erickson, Greg Schiano and worst of all, Bobby Petrino, who didn’t even finish his only season with the Falcons (3-10) in 2007.

Even Alabama coach Nick Saban, who just won a record seventh national title on Monday night, flamed out in two seasons with the Dolphins (15-17) in 2005-06.

Johnson, an analyst for Fox Sports, talked to Meyer “three or four times” as the coach contemplated the potential move. Johnson won’t predict whether Meyer will succeed and wouldn’t divulge details of their conversations.

But here are swing factors that I think could make the difference:

— Picking the right players. Drafting Lawrence with the top pick will be the easiest move Meyer can make. Lawrence is a phenomenal talent who checks all the boxes, including intangibles such as leadership and poise. After Lawrence, though, the moves that Meyer and the next Jaguars GM (former 49ers GM Trent Baalke has served as the interim since the November firing of Dave Caldwell), will be critical. The draft capital can’t be squandered. Nor can the extensive salary cap dollars that will allow the Jaguars to be perhaps the biggest players in free agency in 2021, when they will be projected to have somewhere in the neighborhood of $50 million in room under a cap that could settle in around $175 million per team. Pay the right players the right amount, and it can go far in establishing the right foundation. But with a rookie salary pool, the draft is even better for getting long-term bang for the buck. An edge for the draft that Johnson possessed in his transition a generation ago that should apply to Meyer: familiarity with players he recruited, coached and/or scouted and coached against.

— Surviving the NFL grind. Meyer is undoubtedly driven, but he also cited health and family reasons after stepping down at Ohio State and before that, Florida. Apparently those issues are no longer on the table. After all, the grind on the NFL level is much more consuming for coaches — especially those charged with personnel power — than on the college level. Of course, standards and demands vary for how individual coaches run their shop, but Johnson left quite an impression in declaring, “On the NFL level, it’s 24/7 for 12 months.”

— Pillars of support. Naturally, much scrutiny will focus on Meyer’s ability to develop Lawrence. Yet that’s an essential component of a much larger picture. An attractive element of the Jaguars job is progressive team owner Shad Khan, whose track record (and extensive non-NFL business) has been to hire those he perceives to be the right people and allow them the authority to do their jobs. No, that didn’t quite work out with Tom Coughlin running the show. But with Khan also invested in developing the business footprint of the franchise (including the international imprint in London) it’s a philosophy that could work well for Meyer — if he’s supported to a high level with his staff of assistants. It’s unclear who Meyer will tap to run his defense and who’s in line for other significant roles. Yet the ramifications could be make-or-break. And you’d think that he’d look to include some assistants with NFL experience.

Time will tell whether Meyer can leave a mark similar to Johnson’s that has been so rare. With the Jaguars, the opportunity for Meyer comes with the built-in advantages of a No. 1 pick to use on the franchise quarterback and ample room under the salary cap. What can he do with that?

The NFL world is eager to find out.