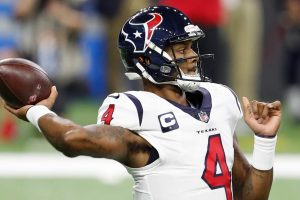 Start with the shock across the NFL stemming from the allegations against Deshaun Watson. The disgruntled Houston Texans quarterback with a squeaky clean image is suddenly facing separate civil suits from multiple women alleging sexual misconduct after they were hired by Watson as massage therapists.

“I hope and pray it’s not true,” an NFL general manager from a rival team told USA TODAY Sports.

Another GM, same sentiment: “I hope that this is not true. This guy’s reputation has been impeccable. It’s disappointing.”

And still this, from another GM: “My first thought was, ’Somebody’s trying to take advantage of Deshaun.’ But if they’re taking it to this level and are willing to put themselves in court, they must have something.”

As the Houston attorney representing the women, Tony Buzbee, filed four more lawsuits against Watson on Thursday night, and the suits became public Friday morning, the ripple effect is intensifying – even as Watson, 25, has broadly denied wrongdoing. It is unclear whether any of the women have reported the incidents to police, or plan to do so.

USA TODAY Sports spoke with the GMs for four NFL teams on Thursday under the condition of anonymity to assess the damage from an evolving situation that not only threatens Watson’s image but could significantly impact his market value as the star quarterback seeks a trade from the Houston Texans after reportedly declaring that he will never play for the team again. This comes just months after Watson signed a four-year, $156 million contract extension.

The GMs spoke on the condition of anonymity due to the sensitive nature of the issue.

Watson, undoubtedly one of the NFL’s marquee faces, promised to be the center of an intriguing storyline as the new league year began on Wednesday against the backdrop of his trade demand. According to one of the GMs, the Texans could be poised to attract a blockbuster offer that would include three first-round draft picks in exchange for Watson.

But now there are sordid details in the lawsuits from seven alleged incidents that occurred in 2020, including the claim from one woman that Watson forced her to engage in oral sex during a massage session at a Houston office building.

“It puts things on pause,” one of the GMs said. “If I’m thinking of giving up three No. 1s, not right now. Not until I have some answers and get resolution.”

Another GM called it a "major wrench."

In addition to vouching for Watson's character on Thursday, before four additional lawsuits were made public Friday morning, the GMs seemed to agree that if they were considering a bid for him, they would not be deterred at this point by the allegations. Even before the allegations surfaced, several league decision-makers expected the Watson saga could drag out until the start of the NFL Draft on April 29, given the draft-pick capital that would likely be at stake.

Now there’s another timeline to consider, which coincides with the pace of the legal proceedings and the length and findings of the investigation the NFL has launched to determine whether there have been violations of the league’s personal conduct policy.

“Would I still trade for him? Sure,” said one of the GMs. “I would bet on Deshaun. But we would do our due diligence on everything."

Another of the GMs echoed such an approach, saying he would not rely solely on the NFL’s investigation. The due diligence would include the team’s own investigation that paralleled the league’s case, typical of how teams conduct background checks on draft prospects.

Watson’s talent — one of the GMs rates him as one of the NFL’s top five quarterbacks — and the premium of his position is undoubtedly one reason why the key personnel men allow for the benefit of the doubt while expressing caution.

“A guy like Deshaun at that position, obviously you’d have to be interested,” one of the GMs said. “I think I know him to be one of the class acts in the league. You try to let it run its course.”

Easier said than done. Then again, talent buys opportunity in the NFL, which has employed players, including high-profile quarterbacks, who have had an assortment of off-the-field issues. Michael Vick revived his career after serving time in prison on a dog-fighting conviction. Ben Roethlisberger maintained his standing despite sexual assault allegations for which he was never criminally charged.

Still, as the #MeToo movement has evolved with numerous cases emerging in recent years involving powerful men victimizing women to various degrees, including sexual assault and harassment, the scrutiny is intense on a league that has engaged in progressive campaigns denouncing domestic violence in its post-Ray Rice era.

Yet the allegations have seemingly changed the dynamics, even if Watson is cleared of wrongdoing after getting his due process.

“He may still have that asterisk,” one of the GMs said, referring to a tarnished reputation.

During the past season, with the league operating under stringent COVID-19 protocols, each of the GMs acknowledged the difficulty in managing the players when away from team facilities. Teams typically supply massage therapists at team headquarters, but the sheer volume of players needing services can be problematic. Besides, many players prefer to use their own therapists.

Over the past season, though, there were concerns among the GMs that many players may have violated the league’s protocols when using the services of professionals while away from team headquarters.

It is unknown whether Watson complied with COVID-19 protocols during the alleged incidents, which include one woman who claimed that he flew her to Houston from Atlanta after they met on Instagram.

Then again, questions of whether pandemic protocols were followed might be the least of Watson’s issues about now.