Home » Opinion: Chicago Bears may have gotten a steal and a savior by drafting QB Justin Fields

Opinion: Chicago Bears may have gotten a steal and a savior by drafting QB Justin Fields 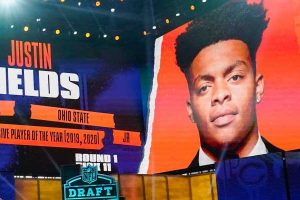 Perhaps the new hotshot quarterback from Ohio State — one of the absolute stunners from the first round of the NFL draft Thursday — will turn out to be the savior who allows coach Matt Nagy and GM Ryan Pace to keep their jobs for a few more years.

Then again, maybe not.

You know how it goes with first-round quarterbacks. The hit-miss factor is like 50-50.

Yet somebody had to roll the dice on the amazingly talented Fields, who has the skill set — like 4.3 speed in the 40-yard dash and deft accuracy — that might make him the steal of the draft. Of course, three other teams that picked quarterbacks passed on Fields, who was subjected to so much doubt about his NFL readiness as draft day loomed.

Leave it to the Bears to make the move — and so aggressively, too, in trading up nine slots to No. 11 to get their target. Are congratulations in order? Have the Bears, established in 1920, finally given themselves a catalyst for a 21st century offense?

That’s certainly the hope, especially after flubbing it so badly in 2017, when Pace aggressively moved up one slot to No. 2 overall (and got fleeced by then-rookie 49ers GM John Lynch), drafting Mitchell Trubisky while passing on Mahomes and some other quarterback named Deshaun Watson.

So yeah, they’re trying to make up for some major lost ground. Trubisky has moved on. Mahomes is the face of the NFL with MVP and Super Bowl credentials. Watson, pending his off-the-field issues, has the talent to still be a force.

But hey, that’s the past. The future is that the Bears — who made a play to trade for Russell Wilson, then signed Andy Dalton as a stopgap — might have just landed the best quarterback-to-be in the NFC North … if, of course, Aaron Rodgers gets his wish granted and leaves Green Bay.

The Bears' braintrust is already widely viewed as hot-seat material, which means at least a couple of things: Pace and Nagy might not even be around when Fields is ready to blossom. Or, despite having a veteran in the mix in Dalton, they may be tempted to rush Fields while trying to save their jobs.

Either way, it adds up to some immense pressure for Fields. Sure, that comes with the territory when you’re a quarterback, and Fields has already excelled on the biggest stages that are attached to being The Man at Ohio State.

Yet the clock is ticking and the standard comparison — the kid in Kansas City — will keep getting better.

Nagy, though, has to love the opportunity. He couldn’t quite develop Trubisky into a star, so here’s a do-over. You can’t knock the Bears for trying. Since that 2017 brain lock, they’ve swung repeatedly to cover for that gaffe. They signed Nick Foles. Pursued Wilson. Brought in Dalton. And now this.

And if it doesn’t work, we all know what comes next.