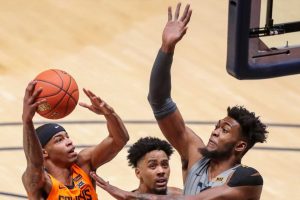 The odds were certainly against Oklahoma State. No Cade Cunningham. No Isaac Likekele. Huge problems at No. 5-ranked West Virginia, right?

The Cowboys, ranked 17th in the Ferris Mowers Coaches Poll, gave the Mountaineers more than they could handle in an improbable 85-80 upset Saturday afternoon in Morgantown, West Virginia, to end the regular season. They also kept Bob Huggins from notching his 900th career win.

OSU again proved it’s more than just Cunningham and even Likekele. Cunningham sat out with a sprained left ankle suffered Thursday. Likelele is recovering from a foot injury.

This young group has grown up. It’s why the Cowboys are in position for the fourth or fifth seed next week in the Big 12 Tournament in Kansas City.

OSU overcame a huge free-throw discrepancy and turnover problems again. The Cowboys got big days from nearly the entire roster.

The other guys again

It starts with Avery Anderson III. Throughout the season, Anderson arguably has been OSU’s most-improved player. Saturday, it was his show.

He made his first five shots. He didn’t really cool off from there.

He finished with a career-best 31 points on 11 of 14 shooting. He added six rebounds and a steal.

His biggest moment was a step-back, pull-up jumper with 31.9 seconds remaining for an 82-78 lead. He hit three free throws down the stretch.

Any game with West Virginia is physical. That was no different Saturday.

But the Cowboys had to overcome huge foul issues.

That led West Virginia to shooting 34 free throws while the Cowboys shot just 20. At one point, it was 30-10 in favor of the Mountaineers.

Maybe the turnover issues underline just who the Cowboys are: a young team capable of wowing, but also making big mistakes.

OSU committed 20 turnovers, including 11 in the opening half.

Senior guard Bryce Williams committed eight. He had stretches where he had multiple turnovers in a row.

With 4:30 remaining and OSU clinging to a two-point lead, he committed a second straight turnover while serving as the point guard. He was pulled for a bit.

On the flip side, OSU forced 12 West Virginia turnovers, including 10 in the second half.