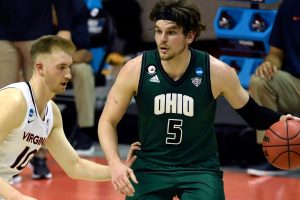 BLOOMINGTON, Ind. — One of the great mysteries of this college basketball season is how it impacted teams when they had to shut down for a COVID-19 case, even for a week.

What Virginia was trying to pull off coming into the NCAA men’s basketball tournament was unprecedented. Having been removed from the ACC tournament last Friday due to a positive test, the Cavaliers weren’t able to practice at all until their quarantine was lifted Thursday.

Was that the reason No. 4 seed Virginia lost to No. 13 seed Ohio, 62-58, in Assembly Hall on Saturday? Was it heavy legs? Lack of practice time? Or were the Bobcats just a better team that exposed a Cavaliers team that had vulnerabilities all season?

We’ll never know for sure.

What we can say with certainty is that the Ohio Bobcats, who tore through the Mid-American Conference Tournament last week to earn their NCAA bid, executed better down the stretch and earned every bit of this upset. They’ll advance to the Round of 32 to play No. 5 seed Creighton in the West Region.

Led by guard Jason Preston, who scored nine points with 13 rebounds and eight assists, Ohio scored on a stretch of six of seven possessions inside the final five minutes with an array of excellent ball movement, clock management and clutch shooting to build a seven-point lead with 1:06 remaining.

Meanwhile, Virginia — which won the last NCAA Tournament played in 2019 — struggled to make shots throughout the game and especially in the second half. Virginia finished 20-of-58 from the field and 7-of-29 from the 3-point line, including 3-of-14 in the final 20 minutes. Sam Hauser, the Cavaliers’ leading scorer who shot 43 percent from the arc this season, hit just 1-of-8 threes and 4-of-16 overall for his 15 points.

Ohio was led by Ben Vander Plas, who hit back-to-back threes that changed the game with seven minutes to go, giving Ohio a five-point lead after it had trailed for most of the first and second half.