Home » Niners go with NDSU QB Lance with No. 3 pick

Niners go with NDSU QB Lance with No. 3 pick 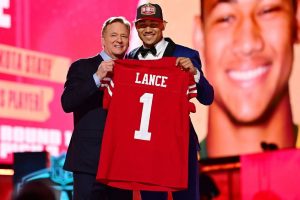 After trading up for the No. 3 overall selection in the NFL draft, the San Francisco 49ers made an equally bold move Thursday night by using the pick on North Dakota State quarterback Trey Lance.

That the Niners chose Lance came as a bit of a surprise after they had been connected to Alabama’s Mac Jones for more than a month. The Niners did not tell their coaches or scouts the pick, sources told ESPN’s Adam Schefter, adding that they didn’t know the team was selecting Lance until the pick was announced.

“Really emotional,” Lance said. “Just super thankful for everyone in the green room with me and everyone who has gotten me to this point. Just very blessed to be here.”

San Francisco’s selection of Lance also marks the earliest that a team only one season removed from a Super Bowl appearance has drafted a quarterback in NFL history, surpassing the Green Bay Packers’ selection of Don Horn at No. 25 in 1967, according to the Elias Sports Bureau.

The Lance pick was the final part of a process that began with San Francisco’s trade last month with the Miami Dolphins, who received the No. 12 overall pick this year, first-round selections in 2022 and 2023 and a third-round compensatory choice in 2022.

In the immediate aftermath of the March 26 blockbuster trade, the Niners were linked to Jones, Ohio State’s Justin Fields and Lance, who is considered an unknown because of his lack of experience but also a player with plenty of upside.

Niners coach Kyle Shanahan has said that the organization was hoping to land an “elite” quarterback who can “sit in that pocket and play that position,” but also mentioned candidates who can “run around and make off-schedule plays.”

Although Lance comes with just 17 starts — all at the FCS level — the Niners believe he has the mental and physical skills to eventually morph into the ideal Shanahan quarterback.

In his abbreviated college career, Lance was equally adept using his arm and his legs to lead the Bison to a national championship in 2019. He threw 28 touchdown passes with zero interceptions as a redshirt freshman that season and became the only FCS player in the past 25 years to throw for at least 20 touchdowns and no interceptions. He also rushed for 1,100 yards and 14 touchdowns.

Perhaps most important for the 49ers, Lance was the lone prospect among the top five quarterbacks to spend any meaningful amount of time playing under center and running many of the play-action concepts that San Francisco consistently employs.

The selection of Lance also muddies the future of Jimmy Garoppolo, who led the Niners to their Super Bowl LIV appearance but has been plagued by injuries in his four seasons in San Francisco.

The Niners had been adamant that Garoppolo would remain their starting quarterback, regardless of their decision with the No. 3 pick, but that stance softened earlier this week when Shanahan would not guarantee anyone’s roster spot beyond the draft. Garoppolo, who maintains a no-trade clause and has final approval of any potential deal, has been limited to just 25 of a possible 48 regular-season starts over the past three seasons because of knee and ankle injuries.

Lance said that he’s excited to learn from Garoppolo.

“Everything he’s done, he’s a mentor for me, and I’m super excited to get there and learn as much as I can,” Lance said.