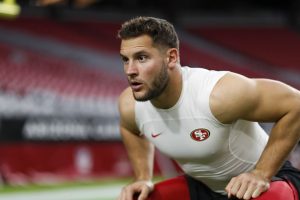 ﻿Nick Bosa﻿’s second professional season ended before it had barely begun. The timing might end up being a saving grace.

Bosa’s 2020 campaign was over before the 49ers’ Week 2 game against the New York Jets was finished. A cart carried the incredibly promising edge rusher and reigning Defensive Rookie of the Year off the field at MetLife Stadium, leaving Bosa to wonder what the next 12 months would be like.

As with any ACL tear, the rehab was long, but Bosa had a key detail on his side. He’d suffered the injury about as early in the season as possible, and nearly 11 months later, he’s passed his physical and expects to be ready to play in Week 1.

“I looked at the schedule,” Bosa said of when he suffered his knee injury, via the team’s official site. “But I knew (since) it was an early injury that I, for the most part, would probably be ready to go for Week 1. And everything right now is trending towards that.”

Bosa’s injury was one of many suffered by key 49ers in 2020. The rash of medical issues upended San Francisco’s season, forcing Kyle Shanahan and Robert Saleh to patch together lineups and hope their schemes would keep them at least somewhat competitive.

San Francisco finished 6-10, but was a tough out in nearly every game and so competitive — considering the circumstances — Shanahan had a decent case for Coach of the Year. Saleh’s efforts earned him the head job with the Jets.

Bosa, meanwhile, was left to watch from home as his team battled through the grueling 17 weeks that make up an NFL season, one played through a pandemic. Knee injuries — ACLs specifically — tend to be tests of mental fortitude as much as they are physically, and this wasn’t Bosa’s first go-around. Bosa had already fought through a return from an ACL tear while at Ohio State, and even in his second experience, he wasn’t spared.

“(It’s) always a really tough time when you come off 2019 and you’re on the top of the world and then start off well in your next season and it’s all taken away really quick. And it was tough,” Bosa said. “Mentally it’s really rough and when your body feels terrible your mind kind of goes to that place, but I had my mom and brother taking care of me.

“As my body started to feel better, my mind followed. And then once you’re walking around and working out, all I really know how to do is work hard. Once you get past the initial pain of it then there’s really no other option but to come back better.”

Coming back better is the goal of the entire 49ers franchise, which is built to again be immediately competitive and has enough young contributors to inspire confidence and hope in a prosperous future. Bosa is one of those contributors, and he’s looking forward to getting a test from a stellar veteran teammate once he returns to action.

“You won’t really know how (my knee) responds until you take a real rep and have a big offensive lineman pushing on you and all that stuff,” Bosa explained. “So, we’re trying to simulate it as much as possible right now and my body’s responding really well. So, once I get out there and go against Trent (Williams) a few times, I think it’ll be a pretty quick confidence boost.

“You really wouldn’t want to have it any other way than practicing against the best so that it prepares you well for Sundays.”

The 49ers hope they’ll get plenty of Sundays from Bosa in 2021, starting with Week 1.