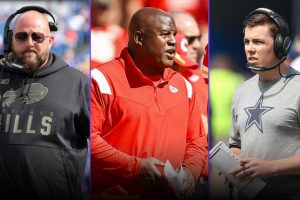 With Urban Meyer and Vic Fangio already out, the NFL’s annual cleansing of head coaches is already underway. This year,

Offense is the name of the game in 2022, so it should come as no surprise that some of the NFL’s top head coaching candidates come from the offensive side of the ball.

If you’re an NFL franchise, picking the right head coach is really about what you want in a boss: Do you want the hotshot offensive playcaller, or the defensive grunt who can blend into the CEO-type role?

While there isn’t a slam-dunk candidate this cycle — there almost never is — there are several intriguing candidates whose names you’ll be hearing a lot over the coming weeks.

The Colts defensive coordinator has already interviewed for jobs: He took interviews with the Jets and Texans prior to the 2021 season, and reports indicate he could take an interview for the open Jaguars position soon.

Taking over as defensive coordinator in 2018, Eberflus has helped mold the Colts defense into a top-10 unit — down 2021 notwithstanding — and is one of the better DC options on the line this year.

What else is there to know about Eric Bieniemy? While Andy Reid might be the brains behind the Chiefs offensive attack, Bieniemy should get some credit for being the man in Patrick Mahomes’ ear.

There’s some questions over just why exactly Bieniemy hasn’t gotten a job despite interviewing a fair amount. Some point to his personal history, while others discredit him for being second-in-command to Reid. Whatever the reason, Bieniemy will get his interviews again — and a head coaching gig will likely follow.

Yes, there is a relation: The Chargers OC is the grandson of NFL legend Vince Lombardi.

Lombardi has been in the game since 2006 at different levels of coaching, eventually landing with the Lions as offensive coordinator before rebuilding himself as QBs coach with the Saints between 2016 and 2020.

Lombardi got the chance to work with Justin Herbert, and the results speak for themselves this year. The Chargers won’t make the dance this year, but Herbert only built on his rookie year in the new offense.

Coaches aren’t typically plucked from Sean Payton’s coaching tree, but Lombardi might be the next.

Leftwich is already a hot coaching candidate: The Jaguars already put in a request to interview the Bucs OC, and he will reportedly take the opportunity to interview.

Clearly, Leftwich has the ear of Tom Brady and helped foster a really, really good Buccaneeers offense. The talent obviously helps, but putting that talent in position to be successful — and consistently so — is what’s especially impressive.

Daboll has worked with the best of the best, including Nick Saban and Bill Belichick, but his candidacy is interesting: He interviewed for a single job after helping Josh Allen to an MVP-caliber season in 2020.

While there are questions of how the Bills OC will transition from the coach’s booth to the field, he’s done enough to help build a potent offensive attack to get some calls this offseason.

There hasn’t been a whole lot of good to come out of the 2021 Giants season, but Patrick Graham continues to prove to be the goods on the defensive side of the ball.

The Giants defense has been put in terrible positions throughout the season thanks to the league’s worst offense — no matter who’s calling the plays — but they’ve done what they can with the talent they’ve got.

The Sean McVay entourage is red-hot: Former coordinators Brandon Staley and Zac Taylor have their teams on the upswing for the Chargers and Bengals respectively. The NFL is still looking for the next “McVay,” and O’Connell might be that guy.

With O’Connell at the helm, the Rams have continued their run as one of the NFL’s most dominant offensive attacks: The Rams rank in the top 10 in both yards and points scored this year, making good on the trade that brought Matthew Stafford to Hollywood.

The long-time NFL offensive coordinator has helped Lamar Jackson become a top-five quarterback in the NFL, even with an uneven 2021 season. It also bulds to Roman’s case that he helped Tyler Huntley look like a serviceable NFL quarterback.

Roman was the architect of the run-heavy 49ers attack that reached the Super Bowl in 2013 — coincidentally to face the Ravens — with a stop in Buffalo in between. It feels like he may be in live for head coaching interviews sooner rather than later.

Moore survived the Jason Garrett firing and was retained by Mike McCarthy, a guy who knows a thing or two about offense himself.

Under Moore, Dallas has developed one of the league’s top offenses and has helped turn Dak Prescott into a top-10 quarterback in the league and a perennial MVP candidate. He also fits the mold of “young and innovated” which is the  a la mode  choice for NFL franchises.

While the rugged, older, well-traveled defensive coordinator isn’t quite the NFL’s type in 2022, Martindale’s defensive units have consistently been at the top of the league during his stay, even with a less-than great 2021 season.

Martindale oversaw top-three scoring defenses from 2018 to 2020, while injuries and COVID played into an average unit in 2021.

There are a number of retreads and other intriguing candidates heading into the 2022 offseason: