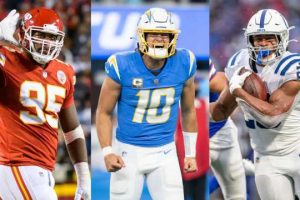 It’s officially Thanksgiving week! What am I thankful for? Well, in this moment, I’m quite appreciative of the individual studs who just made my Sunday a fun day. So let’s give ’em their shine.

Here are the heroes from the 11th NFL Sunday of the 2021 season, Schein Nine style:

I’ve been a longtime fan and believer in his stardom. Prior to the 2020 NFL Draft, I repeatedly touted Taylor as a Round 1-worthy prospect, begging teams to disregard recent misgivings about the running back position. But alas, everyone passed on the Wisconsin product during the draft’s opening night, allowing the Colts to scoop him up with the ninth pick of Round 2, a selection I lauded as a master stroke. He rampaged down the stretch of his rookie campaign, averaging 123.5 rushing yards per game over his final six regular-season contests, scoring eight total touchdowns in the process. And that elite production has carried right on over into Year 2, as Taylor has established himself as the NFL’s best running back in this season.

With a whopping five touchdowns in the Colts’ 41-15 beatdown of the Bills in Buffalo, Taylor leads the NFL with 15 total scores. Having accounted for 204 of Indianapolis’ 370 yards of offense on Sunday, Taylor also paces the league with 1,444 scrimmage yards. Since starting the season at 0-3, Indy (6-5) has ridden Taylor to six wins in the last eight games, with the RB rushing for 951 yards and 13 TDs in this span. Add it all up and here’s what you get: a bona fide MVP candidate. Yes, I know only one back has earned the honor over the past 14 seasons — Adrian Peterson in 2012 — but this 5-foot-10, 226-pound blend of power and speed has dragged the Colts squarely back into the playoff picture. According to NFL Research, Taylor has now tied the single-season NFL record for most consecutive games with 100-plus scrimmage and one-plus rushing touchdown (eight). Whose record did he equal? LaDainian Tomlinson﻿, who set it during his MVP season.

The Chiefs messed around with Jones as an edge rusher early in this season, but he’s returned to a more traditional interior role since the trade-deadline acquisition of Melvin Ingram, and opposing offenses are paying the price. In a huge game against a great Cowboys team, no star shone brighter than Jones, who filled up the box score with 3.5 sacks, a fumble recovery, a forced fumble and a deflection that led to a game-icing pick. What a showing from the 6-6, 300-pound game wrecker in a crucial 19-9 win. Dallas just didn’t have an answer for Jones, who had his way with everyone, including four-time All-Pro guard Zack Martin.

After venturing out to the edges and missing a few games due to a wrist injury, Jones is back to being the most valuable and important Chief not named Patrick Mahomes. And Steve Spagnuolo’s defense, which has given up a grand total of 47 points during K.C.’s four-game winning streak, is back to being the kind of complementary unit that can win a Super Bowl.

A sensational win on a bright stage for a special quarterback. And most importantly, more proof that Herbert isn’t automatically doomed by the uniform he wears.

Up 27-10 late in the third quarter on Sunday night, Los Angeles appeared well on its way to an easy win over Pittsburgh. But then, in the fourth quarter, the Chargers started to Charger: A blocked punt here, a tipped-pass pick there and a fourth-and-1 failure at their own 34-yard line. Suddenly, the Bolts found themselves trailing by three points with three minutes and change remaining.

What in the name of Mike McCoy was going on? Same old Chargers, right? Wrong! Herbert swiftly guided Los Angeles 75 yards, hitting Mike Williams for a 53-yard, go-ahead touchdown that ultimately proved to be the game-winning score.

Herbert was breathtaking all night, throwing for 381 yards and three scores, while also running for 90 yards on nine carries. He’s the first player in the Super Bowl era, per NFL Research, to post 350-plus passing yards and 90-plus receiving yards in the same game. Still just 23 years old, Herbert is doing his best to exorcise decades of Chargers demons, one week at a time.

With Lamar Jackson playing at an MVP level this season, the Bears looked like mincemeat entering Sunday. Lamar is just That Guy. But when the stud quarterback was ruled inactive 90 minutes before kickoff, it felt like a pendulum-swinging development. After all, Tyler Huntley is … well … Tyler Huntley. Baltimore’s backup is a second-year pro who went undrafted in 2020. Expectations were low, even against Matt Nagy’s lowly Bears.

Baltimore was predictably stuck in the mud on offense for most of the game, but still clung to a 9-7 lead late in the fourth quarter. Then Andy Dalton, who was also filling in for a sidelined starter, hit Marquise Goodwin for a 49-yard touchdown with under two minutes remaining. And the game felt over. With no Lamar, the game was over. Or so it seemed. But it’s like they always say: You never want to give Tyler Huntley too much time. Or something like that.

In stunning fashion, Huntley led the Ravens 72 yards to paydirt in five plays, with the key moment being a 29-yard completion to Sammy Watkins on third-and-12. Pulsating stuff. While Baltimore scored just 16 points on the day, Huntley rocked steady enough to nab a win that keeps the Ravens alone at the top of the AFC North standings. Not bad for a quarterback who found out he’d be making his first NFL start on the way to Solider Field.

This guy is a certified stud. I voted him first-team All-Pro last year, when he set a rookie record with 1,400 receiving yards, and he’s been even better in Year 2. Just look at his inspired work over the last two weeks: nine catches for 143 yards in a 27-20 win over the Chargers; eight catches for 169 yards and two touchdowns in a 34-31 win over the Packers. Those two victories were enormous for the Vikings, who now find themselves right back in the playoff picture at 5-5, currently holding the NFC’s No. 6 seed. This is what I love about the 22-year-old wideout: his knack for making big plays in big games.

With 11 100-yard games to his name, Jefferson only trails Odell Beckham Jr. (15) for the most such outings in the first two years of a career in NFL history. And hey, with seven games left in Jefferson’s sophomore campaign, OBJ’s seat on the throne isn’t exactly secure.

In a season of full of shocking upsets, the Texans’ 22-13 win over the Titans still stands out. Houston traveled to Tennessee with the worst record in the AFC, while the Titans entered Sunday’s contest riding a six-game winning streak and owning the conference’s top seed. But a rainy day in Nashville produced a remarkable result. And Desmond King was a strong representative of the shocker.

Benched earlier in the season, King played like royalty on Sunday, picking off Ryan Tannehill in the fourth quarter not once but twice! Did I mention that Tennessee just let King walk in free agency this past offseason?

Sunday’s 32-13 win in Las Vegas was just what the doctored ordered for Cincinnati. At 5-2 back in October, the Bengals held the AFC’s No. 1 seed. But a brutal setback against the Jets on Halloween and a blowout loss to the Browns in Week 9 sent Cincy into the bye week in a troubling state. Nothing like a nice road demolition of a fellow playoff contender to get you back on track. And Mixon played the starring role.

Piling up 123 yards and two touchdowns on a whopping 30 carries, the 25-year-old back allowed the road team to completely dominate time of possession, 37:20-22:40. He routinely demoralized the Raiders with slick cuts and power bursts. Joe Burrow﻿’s been ahead of schedule in his recovery from major knee surgery, and Ja’Marr Chase has proven to be electric right off the bat, but Zac Taylor’s offense is at its best when it’s running through No. 28.

The AFC playoff race is extremely tightly packed, but I still believe Cincinnati will hit the postseason for the first time in six years.

Can we just given Steve Keim the Executive of the Year right now? After upgrading the Cardinals’ roster throughout the offseason, Keim made a huge midseason pickup by trading for Ertz. Arizona was off to a surprising 5-0 start when the deal went down. And acquiring a Super Bowl hero, Keim sent his team a simple message: This isn’t a fluke, and we are indeed thinking Super Bowl.

﻿Ertz has been a steady presence since coming over from the Eagles, but the tight end provided his best effort yet in Sunday’s 23-13 win at Seattle. With Kyler Murray﻿, DeAndre Hopkins and Chase Edmonds all sidelined by injury, Ertz served as backup QB Colt McCoy﻿’s most devastating weapon, catching eight passes for 88 yards and two touchdowns. Now the Cardinals get to rest up on the bye week with an NFL-best 9-2 record.

I’m a huge Hurts fan, but I’m also well aware of the second-year signal-caller’s rawness as a passer. This is why it hurt to watch the gross imbalance in Nick Sirianni’s offense during the opening stretch of the season. But what do you know? Sirianni starts running the football more, Hurts begins to play like a true QB1 and the Eagles fly right into the playoff race. Philadelphia (5-6) just logged its third win in the past four games, and the 40-29 triumph over New Orleans had to be the most impressive one yet.

The Saints came into Sunday’s game with the No. 1 rush defense in football, yielding a measly 65.6 yards per game over the first 10 weeks of the season. No matter. Philadelphia ran roughshod over New Orleans, piling up a whopping 242 ground yards on 50 carries (a healthy 4.8 yards a pop). Miles Sanders returned to action with a team-high 94 rushing yards, but Hurts ran for 69 yards of his own, scoring three touchdowns along the way.

The Hurts-led Eagles are knocking on the playoff door, and their remaining schedule includes two games against the Giants (3-6), two games against the Football Team (4-6) and a contest versus the Jets (2-8). Suddenly, the future looks pretty bright in Philly. What if the Eagles have three first-round picks in April and they already have an answer at quarterback?