Home » NFL » NFL referee salary: How much money do refs, other officials make in 2022? 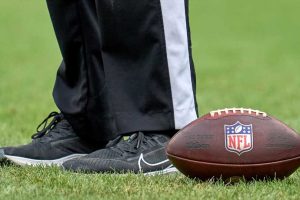 NFL referees, whether you agree or disagree with them, show up on our television screens for now 22 weeks out of the year. How much do these officials get paid to work less than half the year in their black and white stripes?

The NFL does not release their referees’ exact salaries to the public, but some sources have done studies in the last few years to determine an average salary for NFL referees.

Here’s what you need to know about how much NFL referees make in a given year.

How much do NFL referees make?

The official salary for NFL referees has not been disclosed, but as of 2019, it was reported that NFL referees make an average of $205,000 per year.

NFL referees do not get paid by a per game basis. Instead they get paid a flat rate each season. However, if referees are chosen to work playoff games, they can earn an added bonus of anywhere between $1,500-$5,000.

How much do NFL referees make to work the Super Bowl?

While this number is also not disclosed, NFL referees do get an added bonus for working the biggest game of the year. According to Money.com, there have been reports that NFL referees have earned up to $50,000 for working the Super Bowl before. The number tends to average between $40,000 and $50,000.

Is refereeing in the NFL a full-time job?

Working as an NFL referee is a part-time job. They do not receive insurance benefits because of this, but they do have a 401k plan with a partial matching contribution. Additionally, the NFL Referees Association represents them.