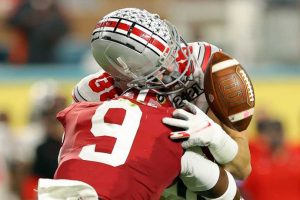 Jordan Battle was right on target, and unfortunately, it cost him.

With the Buckeyes marching down the field during Monday night’s College Football Playoff title game, the Alabama DB squared up and hit Ohio State tight end Jeremy Ruckert right in the head with the crown of his helmet, causing an incomplete pass and earning Battle an automatic ejection on the play.

Both players were hobbled following the hit, which was flagged for targeting. Targeting calls trigger an automatic review, which went quick and was upheld on the field. Ohio State would net a field goal because of the play.

Battle’s hit carried the key components of a targeting call: Forceful contact to the head and neck area of a player, and utilizing the crown of the helmet to make the hit.

The rule, implemented in 2008 for the NCAA, is made to protect offensive and defensive players, but some have noted that an auotmatic disqualification seems too harsh of a penalty for the offending player.

Several NFL players and many observers on social media were disappointed with the ruling on the field, attributing the hit to, well, just playing football.