Home » NFL » NFL Offensive Rookie of the Year odds: JaMarr Chase vs. Mac Jones comes down to the wire

NFL Offensive Rookie of the Year odds: JaMarr Chase vs. Mac Jones comes down to the wire 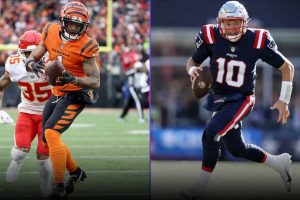 Micah Parsons has made life easy on NFL award voters. The Cowboys’ linebacker is the runaway pick to be named Defensive Rookie of the Year. He is such a heavy favorite that FanDuel Sportsbook doesn’t even have odds out for him to win the award, and just has him listed as second on the overall Defensive Player of the Year odds.

The same can’t be said of the race for Offensive Rookie of the Year.

All season, two former first-round picks have battled it out to win the honors. Mac Jones was named the starting quarterback in New England to begin the year and has helped the lead the team back to the playoffs in his first season in the NFL. Ja’Marr Chase has immediately re-discovered the chemistry he had with LSU teammate Joe Burrow and has been the top target in the playoff-bound Bengals’ offense.

Quarterbacks have taken the edge on the award in recent years, with three of the last five winners having been QBs, while a wide receiver has not been named the winner since Odell Beckham Jr. won the honors in 2014. Which player will ultimately be named the winner for the 2021 season? Sporting News breaks down the case for each talent.

Any preseason concerns for Chase were thrown out the window early in the season. His first NFL regular-season game, Chase caught five passes for 101 yards, including a touchdown, to make his presence known.

He continued that success through the first seven weeks of the season, with his 754 receiving yards trailing only Cooper Kupp’s 809 to begin the campaign. Chase went through a bit of a quiet spell, however, as he caught just 26 passes for 284 yards with four touchdowns over his next seven games.

But with the Bengals’ playoff fate in a precarious position over the past two games, Chase again stepped it up, catching seven passes for 125 yards against the Ravens to move Cincinnati to first in the division. He then turned in one of the best single-game performance by a rookie receiver in NFL history, catching 11 passes for 266 yards and three touchdowns against the Chiefs. His 266 receiving yards were a single-game record for a rookie.

Here’s how Chase ranks among NFL receivers entering the final week of the season:

That’s not among rookie receivers. That’s all receivers. His 1,429 receiving yards are the most by a rookie in NFL history and his 13 touchdowns are the second-most behind Randy Moss’ 17.

Pro Football Focus has him listed as the 11th-best receiver this season with an offensive grade of 82.8, and it grades him as the sixth-best deep threat at 99.5. It also lists his 628 yards after catch as the third-most in the league behind Kupp and 49ers’ hybrid threat Deebo Samuel.

Chase has delivered on the hype that led him to be drafted fifth overall in the 2021 NFL Draft, and he has established himself as one of the league’s premier wide receiver talents. But was his campaign enough to topple Jones?

Rookie quarterbacks are often given time before being handed the reins to the offense of an NFL team. But that wasn’t the case with Jones.

The 15th overall pick in the 2021 NFL Draft was named the starter before the end of the Patriots’ preseason, prompting the team to cut Cam Newton, who guided the team’s offense the previous year.

Here’s where Jones ranks on the year among QBs:

Jones is also tied for the ninth-best offensive grade, according to PFF.

It’s not like Jones has turned the team around with experienced talents, either. His two leading receivers this season have been Jakobi Meyers and Kendrick Bourne, who came into the season with a 222 receptions for 2,857 receiving yards and 11 touchdowns across six previous campaigns.

As could be expected with a rookie quarterback, Bill Belichick has not often tested Jones’ arm deep down the field. Jones ranks 21st in deep ball pass attempt percentage (10.6 percent), per PFF, while he ranks eighth in intermediate range (22 percent) and 11th in short range (47.9 percent).

He has especially found success throwing the ball short, as he is given a pass grade of 84 per PFF, which ranks third, while his passing grade of 84.3 on deep passes is 16th in the league. When called upon, Jones has also been a proficient scrambler, as he has rushed 41 times for 125 yards.

It quickly became clear that in a draft class that featured a strong quarterback class, Jones was going to emerge as the top rookie. But now it will come down to him and Chase to see whether Chase will be the third Bengals’ receiver to win OROY or whether Jones will be the first New England QB to take home the award.