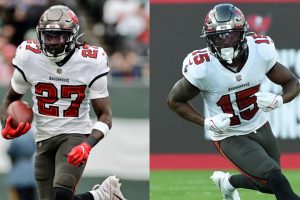 A pair of offensive weapons will be out for the defending Super Bowl champs in Sunday’s portion of Super Wild Card Weekend.

Tampa Bay Buccaneers running back Ronald Jones (ankle) and wide receiver Cyril Grayson (hamstring) are have been officially ruled out versus the Eagles.

Jones and Grayson were unable to practice all week due to their injuries and are the only Buccaneers ruled out. Wide receiver Justin Watson (quad) and cornerbacks ﻿Carlton Davis﻿ (back) and ﻿Sean Murphy-Bunting﻿ (hamstring) are officially questionable.

Bucs coach Bruce Arians said on Friday that he expects pass rushers Shaquil Barrett (knee) and Jason Pierre-Paul (shoulder/knee) to play after missing the last two regular season games. Barrett practiced in full on Friday while JPP did not participate. Neither carry a game status designation heading into Sunday.

As for linebacker Lavonte David and RB Leonard Fournette﻿, who were both designated to return to practice this week from injured reserve, Arians said both players will be game-time decisions.