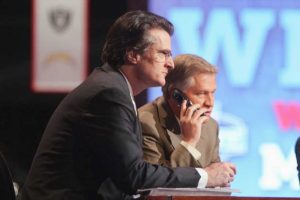 ESPN analyst Mel Kiper has fired off a lot of hot NFL Draft takes throughout his career, but nothing he has uttered at the league’s annual event can possibly rival his thoughts on pizza.

During the most recent episode of the “ESPN Daily” podcast, Kiper spoke to Pablo Torre about several topics, including his strange eating habits. Kiper told Torre that he eats pumpkin pie “as many times as I possibly can” and will even kick off his morning with pumpkin pie for breakfast. He doesn’t eat pumpkin pie every day, but that’s only because it is not always available to him.

NFL MOCK DRAFT: What Kiper, other experts are saying about first round

Oh, but it gets weirder. Torre then asked Kiper to reveal his pizza-eating process, and it is . . . something.

“It’s mostly just the sauce and the dough, and then I put the mashed potatoes on it, and that’s what I do.”

Uh, what the hell?

And, in case you thought Kiper was just joking around, he later encouraged Torre to try his technique.

If you’ve ever wondered what fuels an NFL Draft expert, apparently it’s copious amounts of pumpkin pie and mashed-potato pizza, which shall henceforth be referred to as “The Kiper Abomination.”