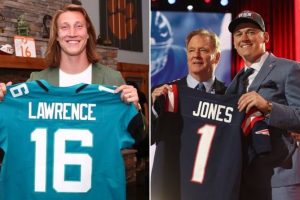 The first round of the NFL Draft produced a mix of predictability and chaos as the top 32 college prospects were selected.

The Jacksonville Jaguars claimed a double-whammy with a pair of first-round selections that will revitalise their offense for the coming season and beyond.a

The Jaguars’ pick of quarterback Trevor Lawrence came as no surprise to anyone – the Clemson play-caller was considered head and shoulders above the pack as the best quarterback prospect in the draft class.

But the Jaguars stint in the war room got even better when, with the 25th pick of the draft, they secured the services of Lawrence’s Clemson team-mate, running back Travis Etienne.

Etienne was considered by some analysts as the top rusher in the 2021 draft class, and provides Lawrence an instant bond in the Jaguars’ offense as the Florida franchise looks to reignite its fortunes under new head coach Urban Meyer.

Quarterbacks dominated the narrative on night one of the draft, with big talking points aplenty. 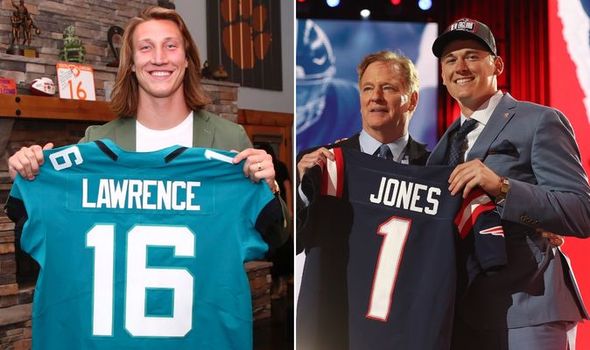 It was widely believed that San Francisco would select Alabama quarterback Mac Jones with the number three pick, but the 49ers instead went with Lance.

It meant that Jones, who was strongly rated, but not considered as talented an athlete as some of his top quarterback colleagues, dropped down the draft board.

But, rather than be disappointed at being passed over by so many teams, Jones was all smiles when he was selected before eventually being snapped up by the New England Patriots at number 15.

The other big-name quarterback to fall down the order was Ohio State’s Justin Fields.

Fields was rated by many as the second-best quarterback prospect on the board, but there was something of a shock when the Denver Broncos opted to pass on him and Jones at number nine and instead draft cornerback Patrick Surtain II.

Then the New England Patriots opted to trade out of the number 10 spot, preferring to collect additional draft picks from the Philadelphia Eagles, who selected wide receiver and Heismann Trophy winner Devonta Smith.

But Fields wouldn’t have to wait much longer, as the Chicago Bears, whose trade up the draft board to take Mitchell Trubisky with the second pick of the 2017 draft proved to be a flop, traded up from 20th to 11th via a deal with the New York Giants to select Fields, who is likely to be installed as the team’s starting quarterback ahead of the new NFL season.

Other notable picks included Florida’s elite-rated tight end Kyle Pitts, who went to the Atlanta Falcons with the fourth pick and, one pick later, LSU wide receiver Ja’Marr Chase, who was reunited with his college quarterback Joe Burrow at the Cincinnati Bengals.

As Super Bowl champions, the Tampa Bay Buccaneers picked with the 32nd and last selection of the first round, and snapped up linebacker Joe Tryon to bolster their defence ahead of the coming season.

Rounds two and three continue through Friday night, with rounds four to seven set to take place throughout Saturday.

After the draft process finishes, the 32 NFL teams then hit the phones to secure the services of the best undrafted free agents from the new intake as they set their rosters for the season ahead.