NFL calendar hits key date; here’s what it could mean for Aaron Rodgers and Julio Jones 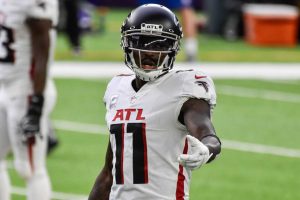 The NFL draft is five weeks in the rearview, and training camps are still nearly two months away. Even with clubs slogging through organized team activities and mandatory minicamps around the corner, it feels like the offseason has hit a lull.

But stay tuned – everything could change after today.

June 1 is a key date on the league calendar because it triggers important salary ramifications. Teams that trade or release players, especially those with hefty contracts, after June 1 can defer the salary cap freight – essentially how a player's bonus money is amortized – associated with such transactions into the following year.

WR Julio Jones just completed his 10th season with the Falcons. Will it be his last? (Photo: Jeffrey Becker, USA TODAY Sports)

Some moves were previously telegraphed, with clubs allowed to earmark up to two releases with post-June 1 designations to soften cap blows. The Philadelphia Eagles, for example, saved $4 million by releasing Alshon Jeffery and Malik Jackson as post-June 1 cuts, even though they dropped both players in March. Tight end Zach Ertz may be next to leave.

Specific to a pair of superstars, June 1 could mean a significant turning point for Green Bay Packers quarterback Aaron Rodgers and Atlanta Falcons wide receiver Julio Jones – All-Pro talents at loggerheads with their teams, but each in the midst of megadeals that made it prohibitive to trade them … before now.

Jones' potential departure first surfaced before the draft, presumably because of Atlanta's salary cap crunch (the Falcons have less then $400,000 available, per Over The Cap). NFL Media later reported Jones actually requested a trade, and he said last week "I'm out of there, man," after Fox Sports' Shannon Sharpe called him while on air.

RANKING ALL 31 OPTIONS: If Aaron Rodgers splits with Packers

STUDENTS OF THE GAME: Women moving in, moving up into NFL scouting jobs

WORST-TO-FIRST CANDIDATES: Which NFL teams can rise to top of their divisions?

Rodgers' unhappiness with the Packers surfaced the afternoon of April 29, hours before the draft began. He'd also remained quiet until last week, when he appeared on ESPN's SportsCenter. He didn't demand a trade or a new contract more befitting of his 2020 MVP campaign, the third time he's won the award, or even shade backup Jordan Love, whose arrival in Round 1 of the 2020 draft has clearly been a point of contention. But Rodgers did talk about "philosophy" and "character" and "culture," careful to express his appreciation for teammates and Green Bay's fans while clearly sending a message to a front office that (understandably) seems intent on keeping him.

► Trading Rodgers previously would have meant a $38.4 million dead cap charge in 2021, which would have easily exceeded the record amount the Eagles incurred ($33.8 million) when they packaged Carson Wentz to the Indianapolis Colts earlier this year. The Pack already paid Rodgers a $6.8 million roster bonus in March, but by waiting to move him – if that's how this situation ultimately plays out – they'd save his $14.7 million base salary for 2021 while just about halving his dead money.

Now, we continue waiting … but with bated breath.