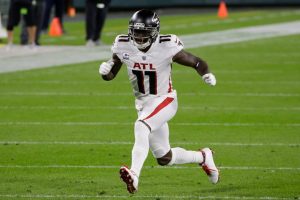 Instead, as Jones joins the second team in his storied NFL career, he will don No. 2 for the Tennessee Titans.

Looking forward to the future ✌🏾 pic.twitter.com/6PI4h8aKCJ

Having previously worn No. 11 for his Atlanta Falcons tenure, Jones is now moving on to No. 2, a selection made possible by the NFL’s recent relaxed rules on jersey numbers.

Brown tweeted out earlier Tuesday that he offered up his No. 11 to Jones, but the future Hall of Fame WR declined the offer.

Now, Jones has a new team, a new number and a new chapter to write starting in 2021.