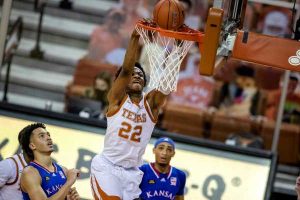 When Kansas is the sixth-best NCAA Tournament team in a league it has won 15 of the last 16 seasons, two story lines emerge.

First, the Jayhawks are having an off year and will not secure a top-four seed for the first time since 2000. Second, the Big 12 has been moving toward being a top-tier conference outside of its posterchild member and 2020-21 is the year it's blossoming.

Kansas' lack of dominance this year has as much to do with the Big 12's strength as it does the Jayhawks' struggles. If the season ended today, the Big 12 would secure five teams with top-four seeding— Baylor, West Virginia, Oklahoma, Texas Tech and Texas. Kansas is right behind with a projected No. 5 seed, while Oklahoma State has vaulted to a No. 6 seed.

Longhorns forward Kai Jones finishes off a dunk against the Jayhawks in the first half of a game at the Frank Erwin Center. (Photo: Ricardo B. Brazziell, USA TODAY Sports)

Those seven teams will make it to the NCAA Tournament, and the league's overall strength is part of the reason there are zero bubble teams hailing from the Big 12.

While the Big Ten has had a strong season, posting the best NET score among power conferences and leading the projected bracket with nine bids, the Big 12's strength shows more at the top of the bracket's seeding: Baylor is a No. 1 seed, West Virginia a No. 2, Oklahoma a No. 3 and Texas Tech and Texas No. 4s.

Texas Tech's three-game losing streak — all setbacks to one of those six other teams — is a great example of how potent the league is, as the Red Raiders barely fluctuated in their projected seeding despite the skid.

Selection Sunday is March 14. The NCAA Tournament tips off March 18.

Note: Most statistical data is used from WarrenNolan.com. The NET rankings (NCAA Evaluation Tool) also are a reference point.

About our bracketologist: Shelby Mast has been projecting the field since 2005 on his website, Bracket W.A.G. He joined USA TODAY in 2014. In his eighth season as our national bracketologist, Mast has finished as one of the top three bracketologists in the past seven March Madnesses. He’s also predicted for The Indianapolis Star, collegeinsider.com and is an inaugural member of the Super 10 Selection Committee. Follow him on Twitter @BracketWag.